When I told my husband that I was planning to take a surf lesson while on a press trip to Ventura, Calif., he stared at me as if I had been snatched by Martians. He weighed his words carefully: “How unlike you.” He really meant: “Who are you, and what have you done with my wife?”

Yes, surfing seems high on the athletic adventure scale—more the purview of well-muscled beach boys than wimpy, flabby writerly types. But I love the ocean, and I couldn’t think of anything more representative of the Ventura experience than to get on a board. 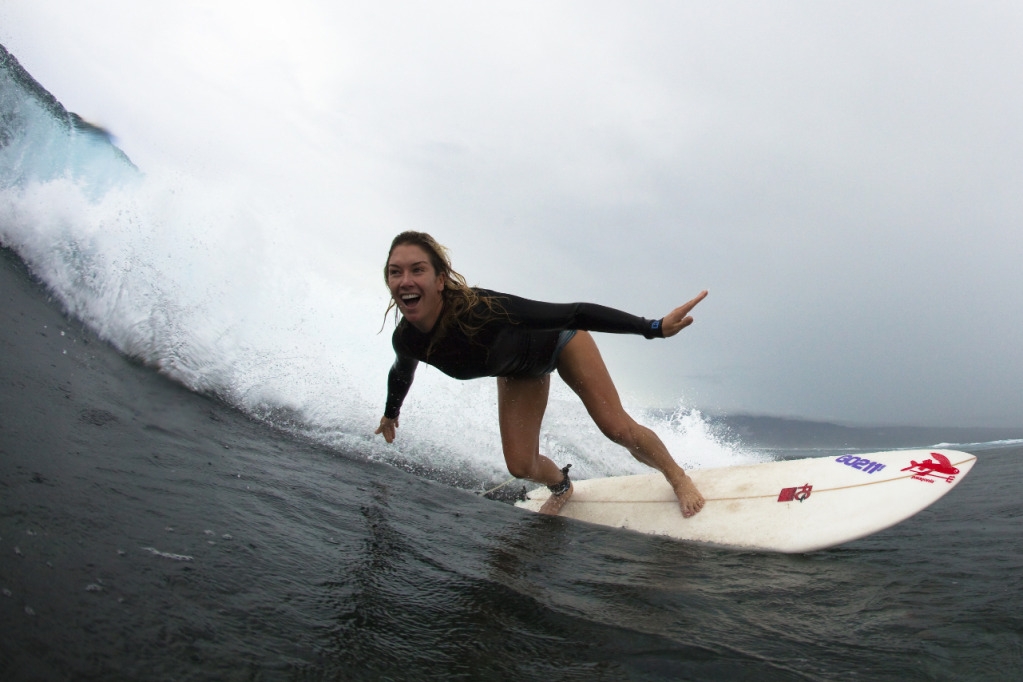 Besides, I had low expectations. I pictured lying tummy-down on the board and flailing through a few swells.

My instructor was Mary Osborne, a champion longboarder and tandem surfer who grew up on the beaches of Ventura. She’s a petite blonde who does surf modeling and won MTV’s “Surf Girls.” And she’s devoted to teaching women and kids to surf. She runs surf camps for people of all ages, sizes and abilities.

Mary is also the co-author of Sister Surfer: A Woman’s Guide to Surfing with Bliss and Courage (Lyons Press: 2005). It’s a how-to book that guides women through the process of learning to surf and covers everything from conquering fear to waxing a board. 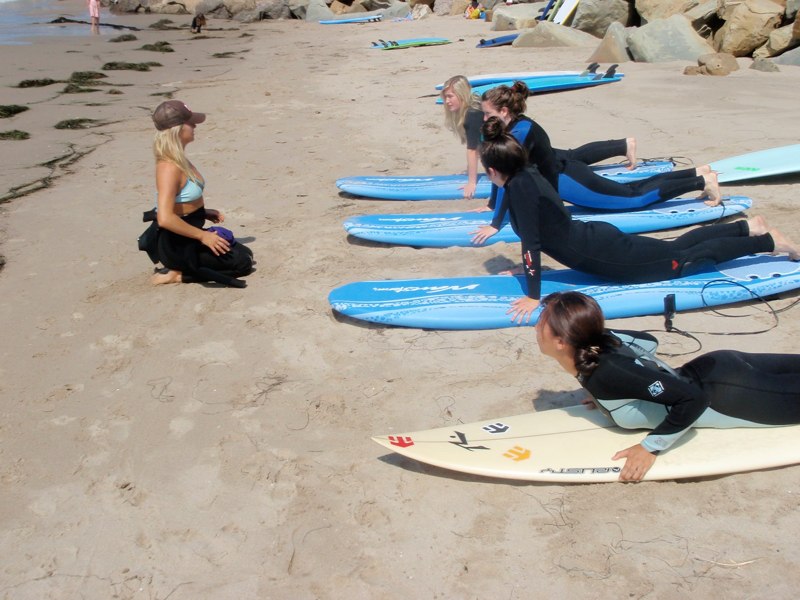 The first step to learning to surf is practicing on the sand with Mary giving pointers.

First surprise: Mary explained to me and the other journalist who was taking a lesson that she was going to show us the new craze: stand-up paddling. In this sport, the surfer stands on a larger, wider surfboard and paddles to catch a wave. I’d never heard of stand-up paddling, but Mary assures us it will be an Olympic event someday.

Second surprise: As we women stood in the parking lot wriggling into cold, clammy, skin-tight wetsuits, I realized there’s a pretty un-glamorous side to surfing. If you’re going to surf much, you get used to changing clothes in public!

Then Mary pulled a board out of her pickup and balanced it atop her head with the posture of a ballet dancer. Once on the sand—we were at Surfer Point by Ventura Pier—she demonstrated how to lie on the board and bring yourself to standing. It starts like the Upward Dog pose in yoga and then you kick a leg back into a lunge and bring yourself erect. Hello core muscles!! 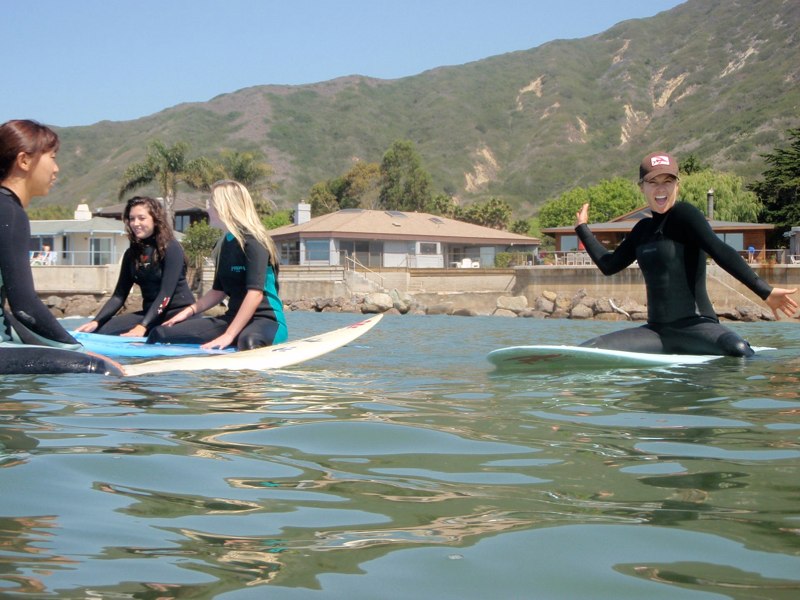 Practicing in the ocean

After we’d practiced that move on land, Mary demonstrated stand-up paddling on the water. She made it look easy, bouncing right up on the board to a standing position. As the board skimmed along the surface, she looked like she was walking on water while “sweeping” the ocean surface with a broom-like paddle.

I couldn’t imagine being able to achieve a vertical posture. Yet, I followed Mary into the ocean, and with her patient coaching, I hand-paddled myself while lying on the board (super fun as you glide over the swells!) and then managed to stand on my knees and cautiously paddled. It’s a real lesson in balance.

Ultimately, Mary convinced me I could even stand up on the board. I gave it my best shot—twice—but always plummeted into the sea when I got semi-erect. But here’s the thing: it was fun! Even falling was okay—sort of goofy as you flop unceremoniously into the water—although getting back on the board in deep water was challenging for me.

So, I had a blast trying to surf, and honestly, I can see how with an instructor like Mary and some practice, pretty much anybody could get the hang of surfing…and soon be hanging ten!

There’s an ecological angle to my surf lesson: Mary Osborne is just one of the many pro surfers who are becoming ocean ambassadors by helping the public become aware of the importance of preserving and protecting oceans and beaches. (One of Mary’s sponsors is outdoor gear company Patagonia, a leader in corporate sustainability.) 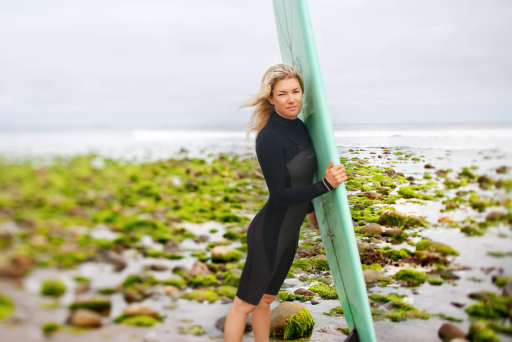 Mary and other surfers know firsthand about polluted, contaminated oceans. They wade through debris that washes up on shorelines daily. And, shockingly, many surfers are infected with potentially life-threatening staph infections from the water. Storm and sewage runoff washes harmful bacteria right into the water for a brew that’s toxic to both humans and ocean animals.

In addition, Mary is currently on a plastic-pollution research trip run by The 5 Gyres Institute to help raise awareness of the problem. Along with a team of researchers, she and fellow professional surfer, James Pribram, are sailing from Rio de Janeiro to Cape Town, South Africa, to explore the Atlantic plastic “gyre”: a rotating system of ocean currents where floating debris accumulates. This plastic garbage patch harms marine wildlife and potentially threatens human health. See the 5 Gyres blog for updates on the voyage of the research ship, “The Sea Dragon.”

P.S. I’m dying to hear about an un-characteristic adventure you’ve taken, dear reader. Tell me about it in a comment below…