Kissed by the Mediterranean sun, five picturesque Italian villages known as the Cinque Terre cling to the dramatic Ligurian coast and are linked by the 11-mile, seaside Blue Trail, named for the azure sea. Some years ago, my husband, Ken, and I celebrated a wedding anniversary with the goal of walking to each of these villages over two days. 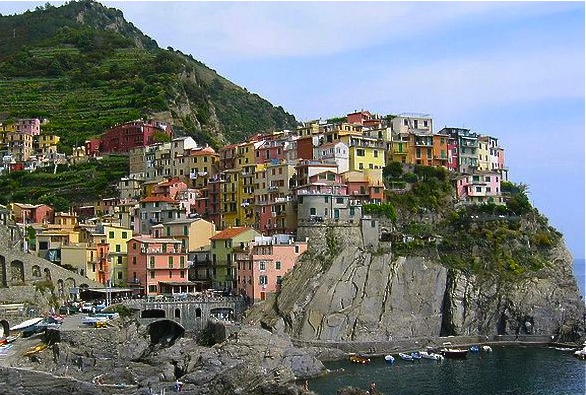 We started, appropriately, on the Via dell’Amore—the “Pathway of Love”—which links the southernmost village, Riomaggiore, with the next stop: Manarola. This easy, mostly paved trail overlooked the turquoise sea. Along the way, lovers had decorated the rocky cliffs with amorous graffiti and had latched padlocks onto cables and railings to symbolize their permanently sealed love.

We continued on to the third Cinque Terre town, Corniglia, which was perched on a high cliff, up 360 steps. Halfway up: a downpour. We raced to the top and scuttled beneath awnings to stay dry. Dispirited, we took a look down the trail out of town. It was steep, muddy, slick.

After some evaluating, we made a soggy descent back down the steps to the train station, where we hopped a quick ride to Vernazza, town number four … where it was still raining. We had previously phoned every small hotel in this pretty town, but the Cinque Terre is popular in June, so we hadn’t found a place to stay in advance.

Bolstered by a cappuccino, however, we made inquiries into hotel vacancies—in case there had been cancellations. Sorry, all full. Chilly and damp, we ate a light lunch in a restaurant and stared mournfully through the rain at the Vernazza harbor, hoping for a break in the clouds. None came, so we returned by train to the city of La Spezia where we spent a dismal night in a sterile train-station hotel.

The next morning, we disembarked from the train in Corniglia (town number two) and trudged back up those 360 steps in overcast, humid weather. Only a few drops fell as we hiked down the crude steps that led through steeply terraced vineyards and olive groves to Vernazza.

Just as we approached town, the sun broke through the clouds, making the pastel-painted buildings glow. The final half-mile of “trail” led us through Vernazza’s narrow back streets, where laundry fluttered in the breeze and pots of hydrangeas decorated the doorsteps.

The town of Vernazza juts out on a little spit of land that protects a harbor. We loved this place! Photo courtesy Italy Tourism

Vernazza was a jewel—an idyllic fishing village with a pier and a church bell to tell time by. Hot from the walk, we raced to a harbor-side bar for cold sodas, then changed into swimsuits and joined the throng of people swimming in the cool Ligurian Sea. As we swam or draped ourselves like lizards over the boulders, Ken and I concluded that Vernazza was gorgeous—and that we weren’t up for a sweltering hike to Monterosso del Mare, the fifth Cinque Terre town. Instead, we were content to behold Vernazza’s sun-drenched pink, ochre, blue, green and coral buildings.

It was ideal; we enjoyed a simple but tasty lunch, then returned to the beach. I flopped on the rocks and read a book while Ken was playing in the water. (One of us had to stay on land to watch our wallets and cameras.) Suddenly, he waved me over to the water’s edge. “I stepped on a sea urchin,” he moaned. He held up his foot; his big toe was spiked with black spines.

We pulled on our clothes and I helped him limp into town to the farmacia (pharmacy), where despite my broken, incoherent Italian (the Rick Steves language guide didn’t list the word for sea urchin!) the sales lady produced a needle, alcohol wipes and a bandage. Clearly, she had encountered such emergencies before.

Ken and I sat right there on main street (it was more of a pedestrian street than a car throughway) and I began spine removal. As I dug into his toe with the needle, Ken distracted himself with the street scene: a man with a dalmation and a couple of kids on tricycles who were fascinated by our street-side surgery. They gawked and demonstrated to Ken how they could count to ten in English. After an hour of extractions, we disinfected the toe, bandaged it, and my brave spouse hobbled around the harbor as we enjoyed the sun’s long, evening rays.

That night in Vernazza, Ken and I dined on smoked tuna with tomatoes and pasta drenched in pesto. Street musicians serenaded us with jazz while the sun set. We sipped vino delle Cinque Terre, an inexpensive white wine made right in the village. We savored our last romantic evening in Italy—and our first town-to-town walk. Even though we still couldn’t find a place to stay in Vernazza, our mini-walking excursion was perfect—sea urchins and all. 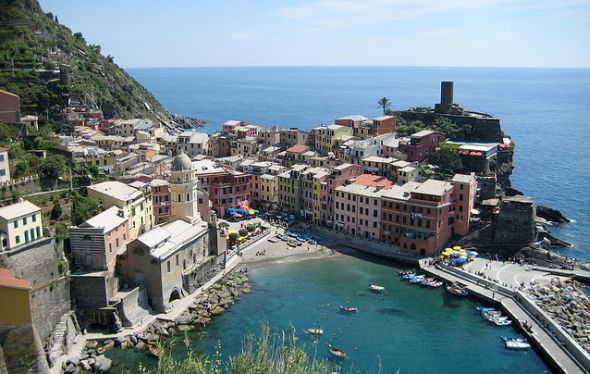 You can look down upon Vernazza's harbor from the trail. On the left bank are the rocks where we swam—and where we encountered sea urchins! Photo by rkelland-flickr. Courtesy Italy Tourism