I celebrated the new year by getting tickets to the King Tutankhamun exhibit during the last days of its stay at the Denver Art Museum. (It closes January 9, 2011).

This canopic coffinette is a miniature of the gold coffin King Tut was buried in. About 15 inches tall, this one held his stomach.

What a way to indulge the senses! As a longtime ancient Egypt lover, I was dazzled, but even more important, I felt the exhibit embodied the artistic spirit of the Nile region 3,300 years ago—and in 1922 when Egyptologist Howard Carter opened the boy pharaoh’s tomb.

Witnessing stunning jewelry, solid-gold sandals, and even gold finger and toe coverings, I got a sense of how much the ancient Egyptians cared about the afterlife of their pharaohs, who were considered human embodiments of the gods.

Each time a pharaoh came into power, he (or she, in a few cases) immediately began building a tomb and commissioning the best Egyptian artists to carve statues, create fine beadwork, paint exquisite frescos and generally make beautiful items that would accompany the pharaoh in the afterlife. The result is a treasure trove of incredibly fine art that has endured for millennia. 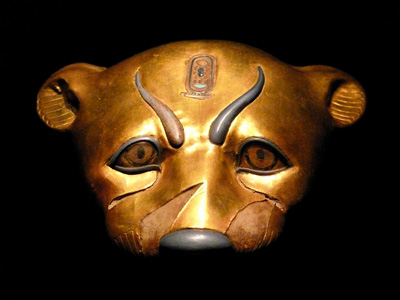 This gilded-wood leopard head was worn during a ritual in which a priest magically opens the mummy's eyes, nose, ears and mouth so the owner could use his senses in the afterlife. Photo: Matthew Prefontain

The irony is that Tut took the throne at age 9 and died when he was 19—so he was just a youth who didn’t have time to become politically powerful—or to amass much funerary art.

One can only imagine the riches buried with pharaohs with more longevity and historical clout—yet their tombs have been plundered over the millennia. In fact, it was probably Tutankhamun’s obscurity that protected his tomb.

Fine Art for All Time

Though the King Tut exhibit bears just one famous pharaoh’s name, on display were artifacts from other Egyptian royals, courtiers and even tomb builders. 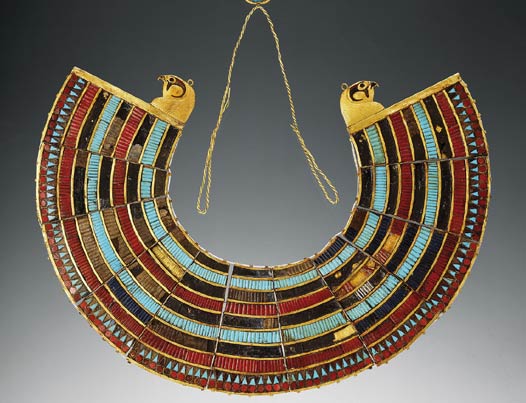 This collar necklace is a fraction of the jewelry buried with the pharaohs.

I had expected the gold items to be breathtaking, but I was also captivated by the graceful stonework and carving, including statues of Queen Hatshepsut and a sarcophagus of Prince Thutmose’s cat.

(Cats were much revered in ancient Egypt as my own purring feline likes to remind me.)

Also effective was the exhibit’s emphasis on Howard Carter’s experience of discovering and excavating Tut’s tomb in 1922—as it was the archaeological find of the 20th century. Vintage photos of how the tomb appeared when it was opened gave me the feel of how excited Carter’s team was at having found a relatively untouched site. Seeing the glimmer of all that gold must have been incredible.

Now my desire to visit Egypt’s wonders has intensified—the thought of going to the source of all this wonderful art pulls me there.

If you go to the museum exhibit—and you must—be sure to rent the audio tour, narrated by actor Harrison Ford (because of his film character Indiana Jones).

And if you can’t catch the exhibit in Denver, it travels next to St. Paul, Minn.

Don’t let long lines deter you! After all, if Tut’s tomb went unscathed for 3,300 years, can’t we moderns endure a few spellbound crowds?