Author’s note: I didn’t travel anywhere this holiday season, but right now my husband is stranded in Oregon due to a blizzard here in Colorado. Though I’m cozy at home, I started remembering this tale of travel woe from January of 2010, which is so detailed I wrote it in two installments. Read Part 1 of this story.

Ken and I leapt from bed at 4:45 on Sunday morning, fed the cat, grabbed the sandwiches we prepared Saturday night, and headed to the bus station. It was Re-Do Day…and we were determined to get everything right, like Bill Murray in the movie Groundhog Day.

This time, the bus to Denver International wasn’t nearly so packed (because it was earlier!) and we arrived a few minutes early. This time, the Southwest check-in line clipped along at a speedy 15 minutes, plus we had no baggage to check. This time, we glided through the security line. No delays, no equipment breakdowns—just smooth sailing. 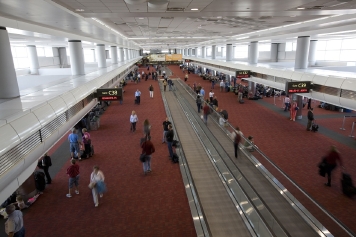 We spent the better part of two days in Concourse C. Photo courtesy of DIA.

We camped out at the gate of the Southwest flight to Oregon one-and-a-half-hours early. We were first in line to board on standby on the overbooked flight, yet the gate attendant gave us a pitying look as she wished us good luck. Crossing our fingers, we grimly munched on our sandwiches. And waited.

Soon that same pitying gate attendant began making announcements: “We’re now taking volunteers for anyone who would like to give up their seat. How about spending the day and night in Las Vegas? We’ll fly you there, put you up in a swanky Vegas hotel, and get you to Portland tomorrow morning. Plus we’ll give you a $200 voucher for your next Southwest flight.”

A few cheery gamblers came forward. The odds weren’t looking so good for Ken and me.

Sure enough, the flight left for Portland while we still sat forlornly in Denver. Dejected, we asked for options. A 2:30 flight to Oakland had two unclaimed seats, and once in Oakland, there were two more oversold flights to Portland that we could try on a standby basis. Let’s do it, we agreed, taking our cue from the Vegas travelers. Oakland might have our lucky number.

With five hours to kill before leaving DIA, we stretched out on the carpet in a quiet part of the concourse and napped. (DIA chair rows all have arms, so if you want to lie down, there’s only the floor.) An hour later, we emerged stiff, but a teensy bit refreshed, and took solace in lunch at a sports bar.

Ken is not exactly what I’d call a fan of the sport he calls “snootball,” so you have some idea about our morale when he plunked down at a table, ordered a pint of Fat Tire, and became engrossed in the Dolphins vs. Steelers game. When turnabout fumbles happened, we started to chuckle, and then to laugh. It was the first time either of us had cracked a smile in two days.

We had a good-humored flight to Oakland: Southwest flight attendants specialize in wise-cracking over the microphone in their Dallas drawls. Besides, Ken and I got a row to ourselves and whole cans of soda instead of a three-ounce cup. What more could we ask for after the last grueling 24 hours?

When we arrived in California, the East Bay turned golden as the sun set, and for a few moments we reveled in looking out the window of the Oakland airport and seeing reeds and shorebirds instead of airplane wings, engines, baggage carts and tarmac.

Our reprieve was short-lived, however, as all the flights to Portland from Oakland were overbooked, and we were unable to fly standby. In fact, a number of other passengers joined our League of Stranded Travelers club. We started making jokes about how we should rent a van and just drive to Oregon. It wasn’t that funny, really.

The Kindness of Strangers

As Ken sat at the gate in a numb stupor, I shifted into manic survival mode, pleading with a soft-hearted gate attendant, Sunita. First, she booked us onto spare seats on a flight to Portland at 6:15 the next morning. (“Whatever you do, don’t miss this flight,” she implored.) Then she also arranged for us to get the “distressed traveler” discount at the airport Best Western. (And boy, did we qualify as distressed travelers!)

And just as it seemed that our trip was giant fiasco, a light appeared at the end of the tunnel. I’d already been hatching the idea of extending our trip to Oregon, and so, despite my exhaustion, I made some calls. Suddenly the chorus of “no”—no seats, no flights, no standby—changed its tune.

And the final, most resounding “yes” of all: Sunita and her supervisor at the Southwest desk performed computer gymnastics and managed to change our return flight for free, by applying the credit that we’d been given by a sympathetic Denver manager about a hundred years ago (really just the day before).

I gave Sunita a huge hug, and later I wrote a letter of appreciation to Southwest Airlines commending her service. (If you’re reading this, Sunita, thank you again!!!!)

Happily Ever After (sort of)

At last, we had confirmed tickets to Portland … for Monday, the day it seemed preordained that we would arrive in Oregon all along. (Indeed, the Travel Fates have an ironic sense of humor.)

In the end, Ken and I spent 48 hours in the process of traveling—or more precisely, not traveling—ate six meals in two airports, and slept at a hotel in the wrong state. But we did arrive finally, and we spent three lovely nights by the Pacific Ocean, which helped us forget our travel trauma.

Other than gray hairs—and the disappointment of not having a fourth night to spend (as originally planned) with Ken’s family in Hood River, Oregon—we sustained no permanent damage.

Footnote #2: If you know anything about the weather in Oregon, you also know that I’m lying about my suitcase sporting a suntan.

Already I’ve heard some other travel horror stories from readers. Feel free to share yours by leaving a comment below.

P.S. I’ll cover some “Lessons Learned” in my next post.