Note: I didn’t travel anywhere this holiday season, but right now my husband is stranded in Oregon due to a blizzard. Though I’m cozy at home, I started remembering this tale of travel woe from January of 2010, which is so detailed I wrote it in two installments.

Into every traveler’s life, a little rain must fall. For me and my husband, our January 2–6 trip to the Oregon coast ended up being not just a drizzle of mishaps, but the perfect storm of travel nightmares.

I was oddly relaxed on January 1, 2010—I had time to pack and was finished with the pre-trip deadlines. After the hectic holidays, Ken and I were eager to spend a few days relaxing and whale-watching on the coast. (Late December and early January see the largest numbers of gray whales migrating south from Alaska to Baja.)

What we didn’t know was that the flight we’d booked way back in summery August was on the worst possible travel day: the Saturday after New Year’s. A day that half the people in the country (so it seemed!) returned from their Christmas vacations so they could be back in the office on Monday.

Blithely—eagerly—we caught the regional bus early that Saturday morning from Boulder to the airport. Our first surprise was that the suitcase-stowing process on the bus took forever, because so many travelers boarded—and we arrived at Denver International 20 minutes late.

Ken and I hurried to the Southwest Airlines check-in counter—only to find that triple the usual line dividers were in place. Even then, the queues wound down the hall and past the coffee shops. As we inched our way forward for 45 minutes, we decided that instead of checking two suitcases (they’re free on Southwest!) that we’d consolidate our liquids and gels into one checked suitcase and carry on the essentials—just in case that suitcase didn’t make it onto our flight.

The clock was ticking, and no one at the Southwest counter was calling for late check-ins—which often happens when lines are long and people can’t get through. We looked around for someone official to let us cut ahead in line, but everyone was working like crazy.

When we finally checked in, a harried attendant took my suitcase, wrote down our gate number, C-49, and told us we were leaving at 10:30 instead of 10:00. “Hurray! The flight is delayed,” we exclaimed. “No…” he said, “It’s on time …” We rushed away to the security line before he had time to check.

Hurry Up and Wait

Clutching our IDs and boarding passes, we crawled through the TSA line, filled with increasingly unjolly-looking passengers. One or two of the x-ray machines weren’t functioning properly, and technicians came in to run tests. More delays.

I could hear rumbling from others in line: “Do you think we’ll we make it on time, Dad?”

When at last we cleared the security section, Ken and I were prepared to sprint to gate C-49. It was 10:05; if the plane was slow to board, we might just be able to dash on. And if—oh please, please, please!—the flight was delayed until 10:30, we would be in good shape. There might even be time to go to the bathroom before boarding.

When we arrived at gate C-49, the doors were about to close on the flight to … Orlando??

“Where’s the flight to Portland, Oregon?” we shouted to the agent at the counter.

“Not here. Let me check.” The agent punched in our destination. “That’s on the opposite side of the concourse—at gate C-32.”

Cursing the check-in agent who had given us the wrong information, we turned around and began to run back the way we’d come, but by now our legs were lead from schlepping heavy carry-ons and coats. I urged Ken to go ahead if he could—he’s the runner in the family. 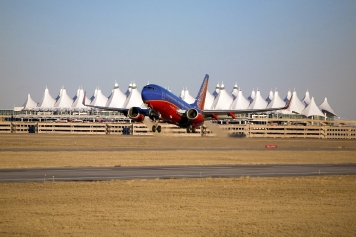 Alas, when we finally arrived at the right gate by 10:15, the plane was gone, and there were already five others in line discussing their standby options with the Southwest agent. The news wasn’t good. It went like this:

“The next flight that’s not overbooked is on Monday. I could put you on a Monday flight.”

Ken and I were numb. Monday? Impossible. That’s halfway through our four-day trip. Dazed, we flopped down on the chairs to gather our wits. We had an hour and a half until the standby flight to Orange County, which seemed the best option. We were sure we would be lucky enough to get to Orange County and then to Oakland and on to Portland on the same day.

The reality was that Ken and I were in what might be called traveler’s denial. First we checked again at the Orange County gate desk, where similar chaos reigned. As the day was wearing on, more and more people had missed their flights.

The Southwest gate agent there didn’t sugarcoat the truth. “Yes, you could get to Orange County, but you’ll never make it to Oakland, much less Portland today,” she said. “If I were you, I’d go back home and try on Monday.”

She did take pity on us and asked her manager for help. The manager authorized her to type a note in the computer that our missed fare could be applied toward another Southwest flight in the future. At least the airport Fates had not turned entirely against us.

Next, Ken had an idea. Why not check with United, which has a lot of nonstop flights to Portland every day and see if we could buy a one-way ticket? We took the shuttle train to United in Concourse B, found the Customer Service Desk, and waited in line for another half hour. The tired-but-polite customer-service person checked her screen, and said brightly, “Denver to Portland? I have two seats on…Monday.”

Dejected, we caught the next bus back to Boulder, with a list of standby flights for Sunday.

Tomorrow we’ll be more prepared, we vowed. We’ll arrive at the airport even earlier, allowing for a 20-minute delay on the bus, an hour at the check-in counter, and an hour for security. We’ll buck the odds and make it on standby—because some of tomorrow’s passengers will be sure to miss their flights. Then we’ll walk onto the plane and disembark in Oregon.

Surely the airport gods cannot frown on us a second day in a row.

Read part 2 of our airport odyssey.