I like quirky events—in any part of the world. They highlight lesser-known facets of our culture, reminding me that there’s so much diversity in any given country, state, or city. 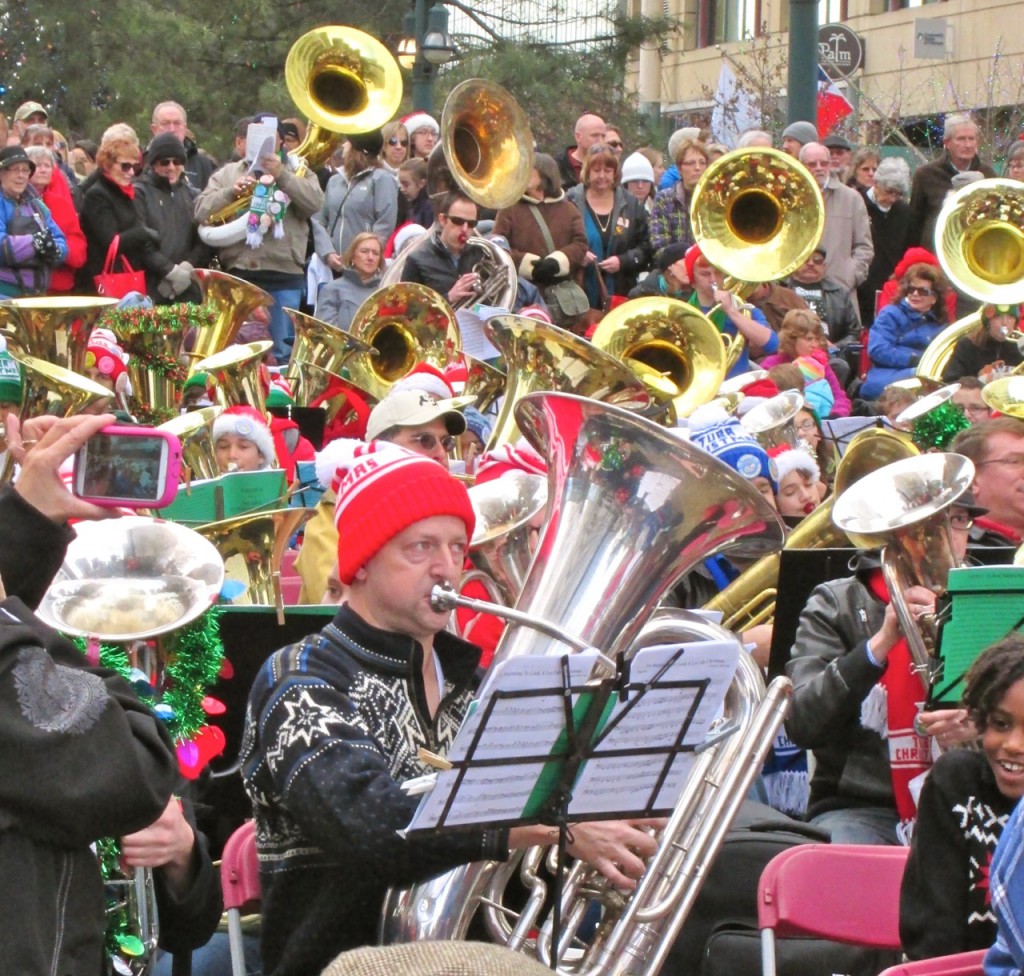 A tuba player gets in the spirit of the season during downtown Denver’s annual Tuba Christmas concert. About 250 tubas participated in this year’s event. ©Laurel Kallenbach

And then there are the tubas.

Yes, every December, literally hundreds of tubas and their variants serenade downtown Denver with Christmas carols played in the surprisingly mellow tones of these unwieldy low-brass instruments.

In an orchestra, tubas are tucked in the back of the ensemble because, really, no one could see the conductor if the tuba sat farther forward. So it’s satisfying when the tuba get its moment in the spotlight at the annual Tuba Christmas. (Full disclosure: I play bassoon, another orchestral bass instrument, so I have an affinity for tubas. We rarely get showy solos, but a symphony wouldn’t sound the same without us!)

Imagine the delight of the masses this year when a choir of 250 tubas gathered in their Santa hats to play harmonious renditions of “Joy to the World,” “Rudolph the Red-Nosed Reindeer,” “Feliz Navidad,” and “Silent Night.”

Trust me, your Christmas is not complete without the bass, baritone, and tenor tones of tubas. 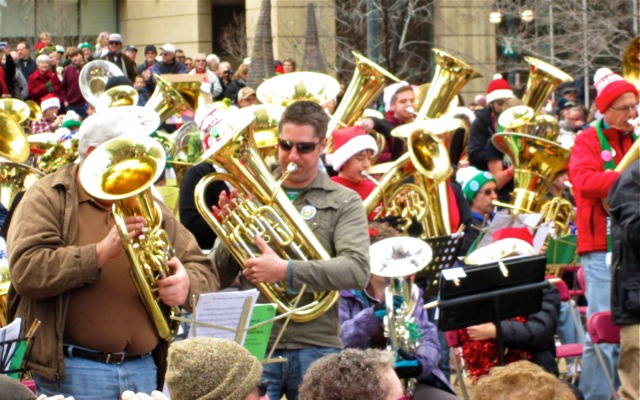 A pair of euphoniums were introduced at the annual Tuba Christmas concert. ©Ken Aikin

In 2018, Denver’s annual Tuba Christmas concert takes place on December 16 at the Denver Performing Arts Complex in downtown. Featuring tuba players from all over the region—and a few from other states, including New York—Tuba Christmas is one of the most celebrated and longest-running holiday festivities in Colorado.

When we went a few years ago, my husband (who plays trumpet, the highest voice of the brass section) and I elbowed our way through a crowd of around 500 people to get closer to the low-brass ensemble, many of whom wore Tuba Christmas stocking caps and decked out their instrument with seasonal décor. (There is nothing bah-humbug about these tubas!)

The Biggest Concert of the Year

Tuba Christmas was founded by the Harvey Phillips Foundation, which focuses on developing, expanding, and preserving the musical arts—with special attention given to instruments not ordinarily the “object of other support.” (Ahem…this means that despite their size, tubas get overlooked.) The first Tuba Christmas was held in New York City’s Rockefeller Plaza Ice Rink in 1974. Today, concerts take place across the globe.

In addition to conducting merry carols—many of us crowd members sang along— retired music professor Bill Clark introduced the metallic musicians with the assistance of Jeanie Schroder, the tuba player in indie-pop group DeVotchka. Playing with 2014’s Tuba Christmas were tuba players from schools and colleges all over the state. They ranged from age 7 to 90, and quite a few multigenerational families performed. Clearly, tuba players enjoy longevity and musical genes.

In addition, we audience members learned that tubas come in all shapes and sizes. There were traditional bass tubas that consist of 18 feet of tubing. There were flashy sousaphones—the ones seen in marching bands with the huge bells that usually spell out the name of a high school mascot. There were euphoniums, sometimes called “tenor tubas,” which look like mini-tubas. A few double-belled euphoniums were present; the joke is they can play duets with themselves.

I believe it’s impossible to listen to a multitude of tubas playing Christmas carols without smiling, singing, and even dancing around. If you don’t believe me, see for yourself! Tuba Christmas always takes place in Denver on the third Sunday of December—snow or shine.

Denver’s 2014 Tuba Christmas concert attracted tuba, euphonium, and sousaphone players of all ages from all over the country. Onlookers enjoyed singing along.  ©Laurel Kallenbach