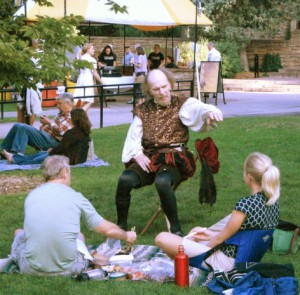 To me, it just wouldn’t be summer without the Colorado Shakespeare Festival (CSF), held for more than 50 years in Boulder.

Performed in the Mary Rippon Theatre (a lovely outdoor stage) on the University of Colorado campus, the plays are always quite wonderfully produced, and they are ably performed by a troupe of professional actors.

I personally believe that nothing beats the raw excitement of seeing live theatre under the stars, especially on a warm summer night.

(Yes, there are nights where it rains, and the audience huddles indoors waiting for the weather to clear. It usually does, and the show continues where it left off.) 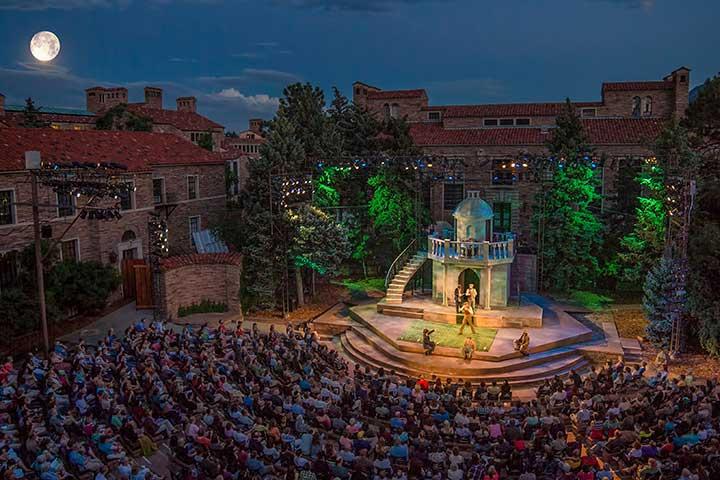 I have a special connection with Boulder’s Colorado Shakespeare Festival: For 30 consecutive summers, my wind ensemble, called the Falstaff Trio (flute, clarinet and bassoon), has performed for the Green Shows before the plays.

Green Shows are the entertainment for picnickers in the Shakespeare Gardens before the show. We musicians get “paid” in tickets to the performances.

Pre-show picnicking is another special memory. Over the years on nights that I’m attending a performance, friends and I have spread our blanket under the trees and dined al fresco while listening to other musicians. Or we’ve listened in on theatre conversations: a costumed actor portraying Will Shakespeare wanders the grounds chatting with picnickers about the play they’re about to see. 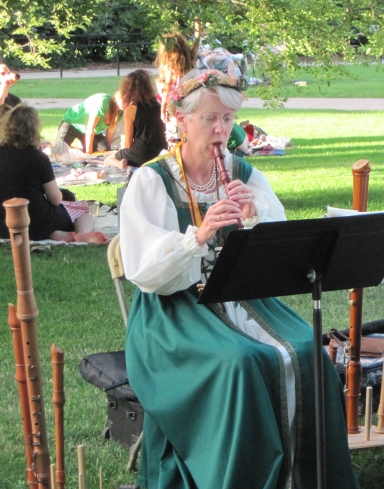 A recorder player with the Boulder Renaissance Consort entertains at the 2010 Green Show. ©Laurel Kallenbach

Sharing fresh summer dishes and a bottle of wine is a timeless ritual—and sometimes our Shakespeare festival is the only time in the busy summer that we haul out the picnic basket.

Picnic tip: If you don’t have time to prepare food, the Festival sells boxed dinners, snacks, and beverages, including beer and wine. (It’s illegal to drink alcohol on the CU campus except for inside the Shakespeare Gardens). And, it’s fun to save dessert for intermission.)

Over the decades, I’ve seen so many wonderful plays by the Bard; the Festival also produces some non-Shakespeare plays each season, such as 2009’s excellent To Kill a Mockingbird.

With great affection I look back at all those Macbeths, Romeo and Juliets, Twelfth Nights, Hamlets and Midsummer Night’s Dreams.

Picnicking before the Colorado Shakespeare Festival is a high art. ©Laurel Kallenbach

The plays that are rarely done get produced too, though less often: I still fondly remember Coriolanus (1995), Much Ado About Nothing (1997), and Cymbeline (2016) as among the best productions I’ve seen.

Then there are fun quirks, such as the night a family of raccoons walked across the building gutters right behind the stage. Talk about stealing the show! We audience members were pointing at Momma and her four little ones as they ambled through a scene.