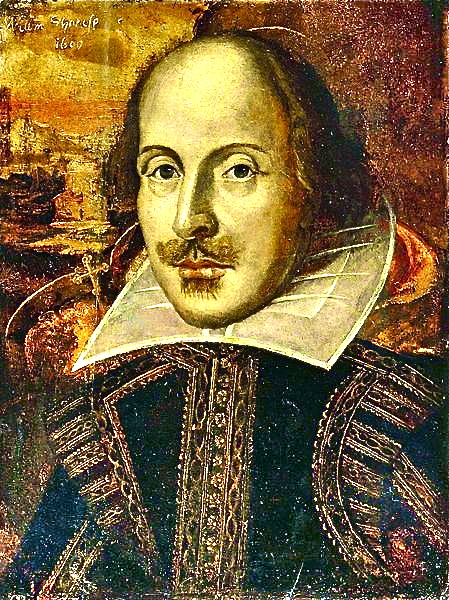 Portrait of William Shakespeare in 1609

2016 marks the 400th anniversary of Shakespeare’s death, and in celebration of the Bard, the Folger Shakespeare Library in Washington, D.C.,  has launched a tour of the First Folio, a book published in 1623 that includes 36 of his plays—18 of which had never been published before.

Why stand in line to see an old (and rare) book published by friends and fellow actors seven years after Shakespeare was dead? By my reckoning, The Bard’s plays have influenced Western culture more than any other written work except the Bible.

Researchers believe that 750 or fewer copies of the First Folio were printed; 233 survive today, of which 82 are in the Folger Shakespeare Library collection.

Shakespeare’s First Folio, a collection of his plays, tours the United States in honor of the 400th year of The Bard’s death. ©Laurel Kallenbach

On the national tour, the book is open to the immortal words of Hamlet’s “To be or not to be” soliloquy. As I stood over the nearly 400-year-old book—separated from it by security glass—I got chills as I read the whole monologue. Those so-familiar lines ponder questions about life and death.

How far that little candle throws his beams (Merchant of Venice)

Without the First Folio, some of my favorite Shakespeare plays, such as Macbeth, As You Like It, The Tempest, Measure for Measure, The Taming of the Shrew, The Tempest, Twelfth Night, and The Winter’s Tale could have been lost.

Can you imagine a world without lines such as “Double, double, toil and trouble; fire burn and cauldron bubble” from Macbeth? Or “O Romeo, Romeo, wherefore art thou Romeo?”

Shakespeare tackled human dilemmas of yesteryear that are still pertinent today. For instance, racism appears center stage in Othello and The Merchant of Venice. We can learn as much from Julius Caesar’s chilling tale of political ambition today as people did more than 400 years ago.

Sir, I am too old to learn (Midsummer Night’s Dream)

The exhibition, titled First Folio! The Book that Gave Us Shakespeare brings the First Folio to all 50 states, Washington, D.C., and Puerto Rico. The 2016 exhibition features First Folios from the Folger Shakespeare Library, whose collection of 82 of these very rare books is the largest in the world.

The First Folio exhibition also includes Renaissance books that were contemporaries of Shakespeare, including an anatomy manual by Andreas Vesalius, Galileo’s drawings of moon craters, a handbook of herbal medicines, Demonology by King James I, and history books and maps that may have inspired Shakespeare when he was writing his plays.

Colorado’s First Folio was hosted at the University of Colorado Art Museum in Boulder. At our exhibition were also costumes and stage weapons used by actors in the annual Colorado Shakespeare Festival, held on the CU campus.

Going to see the First Folio here in Boulder (through the end of August 2016) was the literary equivalent of the Holy Grail for me. Back when I was a kid, I used to peruse a heavy, green-silk bound copy of Shakespeare’s plays—an ancient book that was bigger than anything else on my parents’ bookshelves. At first, I trolled Will’s plays for exotic names for characters in stories I wrote. 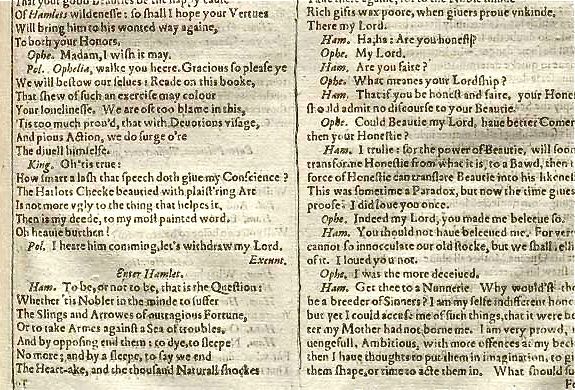 Hamlet’s monologue: To be or not to be. On the right column is the famous line: “Get thee to a Nunnery.” Photo courtesy Folger Library

In junior high, I named our family’s black cat “Hecate” after the goddess of witchcraft, who appears in Macbeth. In eight and ninth grade I read Romeo and Juliet and A Midsummer Night’s Dream. As an English major, I took courses in Shakespeare in both undergrad and grad school.

Starting in 1986, I began playing music on the lawn before performances of the Colorado Shakespeare Festival—and have done so every year since. Attending the plays in an outdoor amphitheater under the stars is a magical, annual summer tradition.

Get thee to a nunnery… or a First Folio (Hamlet)

—Laurel Kallenbach, “I’ll call for pen and ink and write my mind” (Henry VI, Part I)

The Wisdom of Will:

“Be not afraid of greatness: some are born great, some achieve greatness, and some have greatness thrust upon them.” (Twelfth Night)

“Love looks not with the eyes but with the mind. And therefore is winged Cupid painted blind.” (A Midsummer Night’s Dream)

“There is nothing either good or bad, but thinking makes it so.” (Hamlet)

I’ve always been in love with William Shakespeare. ©Ken Aikin

“Cowards die many times before their deaths. The valiant never taste of death but once.” (Julius Caesar)

“The fool doth think he is wise, but the wise man knows himself to be a fool.” (As You Like It)

“Go wisely and slowly. Those who rush stumble and fall.” (Romeo and Juliet)

“Have more than thou showest. Speak less than thou knowest.”(King Lear)

“Love all, trust a few, do wrong to none.” (Alls’s Well That Ends Well)

“This above all: to thine own self be true.” (Hamlet)