The “national” dish of the Swiss canton of Valais is raclette (AKA: pools of melted alp cheese), and the best place to eat it is the Château de Villa in the winemaking town of Sierre (not far from the cantonal capital of Sion). 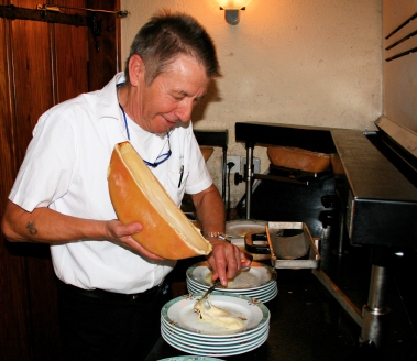 Raclette is a traditional Swiss melted-cheese dish. Here, Alex Aldel scrapes the bubbly raclette onto a plate at the Château de Villa. Behind him, you can see another half-cheese heating under the raclette-oven burner. ©Laurel Kallenbach

By the way, in Switzerland I heard the dish pronounced with the emphasis on the first syllable: RAH-clet. And the name is from the French word, racler: “to scrape.” (Keep reading! You’ll see why soon.)

The Château de Villa is a restored 16th-century castle, so you’re dining in ancient ambiance. The Château’s restaurant was established in the early 1950s to promote local, traditional foods: specifically Valaisian wine, air-dried beef and raclette made using raw milk from alpine meadows. 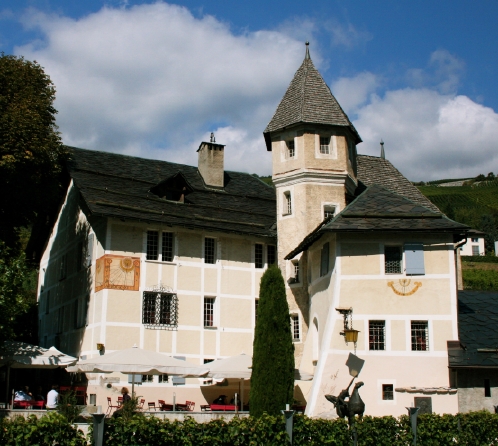 The 16th-century Château de Villa in Sierre serves raclette; it also specializes in Valais wine, which it sells in its extensive wine cellar. ©Laurel Kallenbach

The Château’s literature proclaims itself as “Le Temple de la Raclette,” and it’s earned the designation: Both Swiss gourmands and visitors (like me!) flock here to worship its gooey cheese. In fact, the Château de Villa is so popular that you should book a reservation a month in advance. They serve 15 tons of cheese a year!

How the Cheese Bubbles

Château de Villa offers a special tasting of five mountain-alp cheeses for 31 CHF (Swiss francs) per person. You can see on a map the tiny villages where each cheese is made.

Tonight, Alex Aldel is our racleur (the scraper of the raclette), and he can keep multiple plates going at once. He’s like a master of ceremonies; he keeps the cheese rolling. I have privately dubbed him The Cheese Meister. 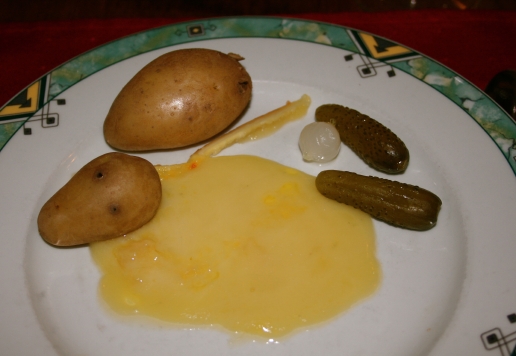 The melted raclette on my plate with boiled potatoes, cornichons, pickled onion, and a small bit of the cheese’s crust. This heat-crisp crust is called “la religieuse” (the nun). ©Laurel Kallenbach

Here’s how the raclette process happens:

1. The racleur selects a half-cheese (Cheese #1) and places it under the raclette-oven burner. He also sets out a row of plates to warm.

2. He checks the cheese from time to time, watching until the surface starts to bubble. Meanwhile, he’s usually watching other varieties of cheese in process.

3. When the cheese is bubbling, the racleur uses a small knife and deftly scrapes a portion onto a plate, usually with one swoop.

4. The racleur whisks the warm plates to the table, and we diners scramble to add boiled potatoes, cornichons (teensy pickles), sourdough rye bread (another Valais specialty), and pickled onions to eat with our cheese while it’s still hot.

5. When you’ve finished your plate, the whole process starts over with Cheese #2. 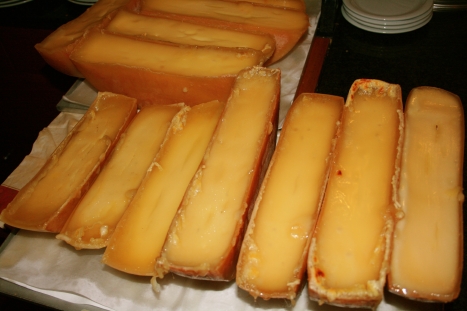 Half-wheels of raclette cheese from all over the Valais region await melting. Each tastes slightly different. ©Laurel Kallenbach

Tonight, I sample nutty, buttery, toasty raclette cheeses from the Bagnes Valley, Les Haudères in the Hérens Valley, Les Marais in the Anniviers Valley, Turtmann, and the Goms Valley.

They’re all delicious. Some are mild, some more strong. I can detect differences in flavor, but honestly my palette isn’t as tuned to the distinctions as a local would be.

Martin Hannart with Sierre-Anniviers Tourism says: “We people of Valais learn how to make raclette before we learn to walk!”

And that, in a nutshell, sums up how the Swiss feel about their cheese. 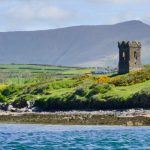