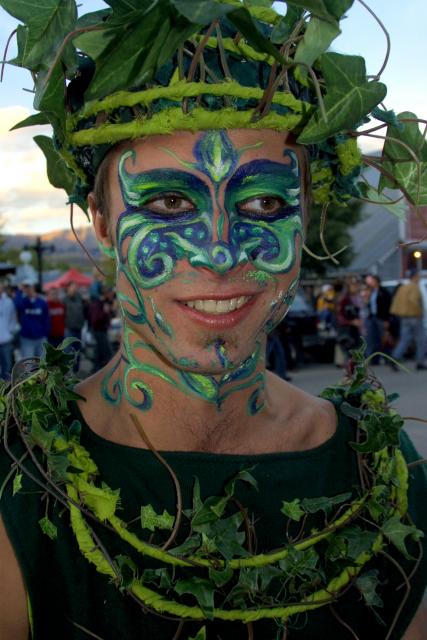 For years I’ve been hearing about a cool fall festival called Vinotok, held in Crested Butte, Colorado, a quaint and hip mountain town. This year was my chance to enjoy the golden aspen leaves and this annual celebration of the summer harvest and autumn equinox. (Vinotok is a Slovenian word for “fall wine festival.”)

In Europe as well as in America’s Rocky Mountains, Vinotok is a time of village feasting, of forgetting the woes of yesterday, and honoring traditional Eastern European roots.

In the Crested Butte community, Vinotok is a big deal! Ken and I were there for the last two days, but the revelry had been going all week: wreath-making at the farmer’s market; entertainment by local musicians and poets; storytelling events; Liar’s Night, a time for tall tales, whoppers and adventure stories; the crowning of the Green Man, a symbol of virility and the promise of returning spring; and a Community Feast featuring regionally harvested dishes.

On Saturday night, the last evening of Vinotok, things really got exciting. All that day, I saw people cutting aspen boughs and riding back to town with them on their bikes. At 5:30 I found out why. Locals dressed as medieval characters paraded down the streets, their heads ringed with fresh flower or leaf wreaths. They carried banners, flags and torches; the shirtless Green Man was decorated in body paint. As they danced down the streets, groups of these characters stopped into restaurants, sang harvest songs, and invited everyone to attend the evening’s festivities. 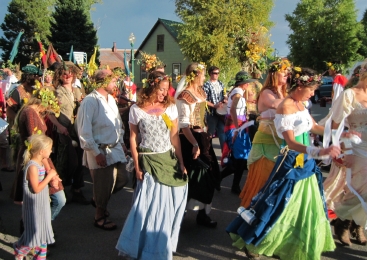 Even people who weren’t with the official parade wore costumes or wreaths in their hair. The evening was starting to feel like a Renaissance Faire.

At 7:30, as darkness fell, a crowd formed around a stage in front of The Eldo saloon on Crested Butte’s main street. At 8:00, a drama honoring the cycles of nature was enacted on the stage. I couldn’t see much because there were thousands of people gathered, but apparently there were characters such as the Harvest Mother (a very pregnant woman from town); and the Earth Dragon, representing nature, who battled with Sir Hapless, the symbol of technology. There was much talk about restoring balance—an appropriate theme for equinox, a time for planetary equilibrium.

In addition, the Red Lady appeared—a human personification of Mt. Emmons (better known as the Red Lady), the red-rock peak that shelters the town of Crested Butte. The drama’s narrator made an impassioned plea for protecting the Red Lady from a proposed molybdenum mine opposed by many in the community. 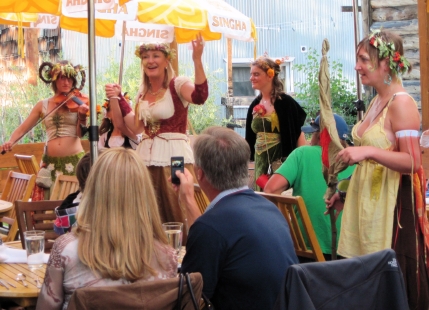 Finally, there was a trial for The Grump, a 20-foot-tall effigy and sacrificial scapegoat for the discordance between nature and technology. All of us in the crowd delighted in finding The Grump guilty, and we screamed “Burn The Grump!”

Then thousands of people poured down Elk Avenue to the town crossroads where a huge bonfire was erected. Into the flames went The Grump; he exploded with a few fireworks.

Now here’s the best part: Weeks before this celebration, local kids made “Grump boxes,” which were set around town. Townspeople write down their “grumps,” grievances they want to forget so they can move into the new season with a clean slate. These thoughts are then stuffed inside The Grump. As The Grump goes up in flames, so does everybody’s complaints. 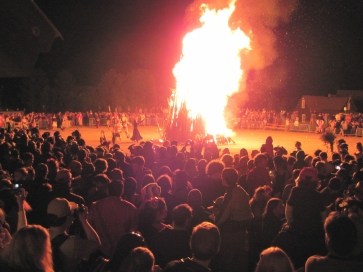 The bonfire that engulfs The Grump. Photo ©Laurel Kallenbach

We newcomers had a chance to participate too. Ken and I each wrote down our grievances on little pieces of paper. Then Ken handed them to a Fire Maiden who danced close enough to enormous bonfire to throw them in.

I was impressed to see earnest boys jotting down their grumps. One teenage girl asked to borrow a pen so she could write hers. It was great to see all generations participating wholeheartedly in Vinotok. On the other hand, the event attracted a huge number of college-age revelers more interested in heavy drinking than Eastern European heritage. Well, I suppose over-imbibing is a centuries-old tradition as well.

As I felt the heat from the bonfire flames on my cheeks, I watched the sparks spewing from the fire and floating into the sky.