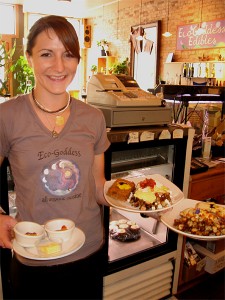 After a morning ogling the golden aspen along western Colorado’s West Elk Loop Scenic Byway—going from Crested Butte over Kebler Pass and McClure Pass—Ken and I were ready for refreshment. We stopped in Carbondale, another former mining town that has been transformed into a lovely place to visit.

Among the shops and restaurants on its lively Main Street is Eco-Goddess All-Organic Cuisine, a casual restaurant that serves top-notch, local-ingredient entrees, desserts—and even organic wines, beers and cocktails.

The menu of this airy, colorful eatery is comprised of 95 percent organic ingredients—and a great deal of the food is sourced from local farms. Many recipes are named after deities from ancient religions. The salads alone—the Demeter, the Isis, and the Kwan Yin—display serious goddess power, including the freshest of veggies. 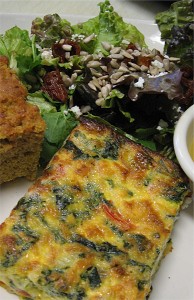 The Paonia Frittata at Eco-Goddess

I ordered the Atira (named for the Pawnee Earth Mother), a wonderful house-made pesto and mozzarella sandwich served on whole-grain focaccia bread. Ken chose a robust vegetable soup with Goddess Cornbread, made with stone-ground corn and mild green chiles for moistness.

While we waited for our meal to come, we read the back of the Eco-Goddess menu, which lists the origins of the ingredients: vegetables from several Carbondale farms, eggs from Paonia and Hotchkiss, goat cheese from Basalt, honey from Parachute.

There’s no meat on the menu—only eco-safe wild salmon from Alaska. Many entrees are vegan or gluten-free, so pretty much everybody’s dietary preferences are represented here. And don’t worry: the desserts may be organic but they’re tasty. Who wouldn’t love an Aphrodite Carrot Cupcake, a Goddess Bomb (cream-cheese frosting sandwiched between two chocolate chip cookies), or a vegan and gluten-free Chocolate Peanut Butter Truffle? 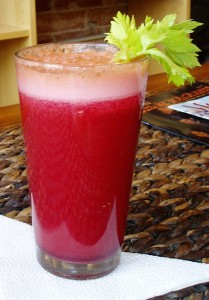 The juice bar serves all-organic specialties such as the Pan, which contains beets, cucumbers, celery, lemon and ginger.

I grooved on the vibe at Eco-Goddess—where the walls are painted with murals of dancing divines. And there’s plenty to love about the restaurant’s commitment to the environment. All food scraps are fed to chickens down the road, to-go containers are compostable, and the restaurant strives for zero-waste.

In short, the food here is, well, heavenly.

Other green places to stay and gnosh along the West Elk Loop include the Fresh & Wyld Farmhouse Inn and a number of local-food and natural restaurants in Crested Butte.