The Green House experience in Boulder brought me two driving firsts: a hybrid car (the Ford Fusion Hybrid) and the prototype of the 2012 Ford Electric Focus. 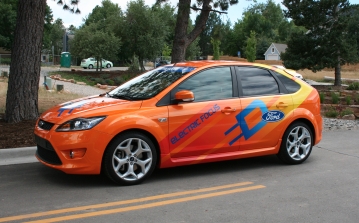 The prototype of the Ford Focus Electric, due out in spring of 2011

Before I got behind the wheel, however, our group of journalists heard about how Ford is incorporating “biomaterials” into their vehicles, including soybean-oil seat foam (instead of petroleum foam). They’re also adding natural fibers (wheat straw, hemp) into some plastic parts; the fiber fillers make the plastic lighter, reducing the car’s overall weight, which in turn saves on gas.

Next, we prepped for the “Ford Fuel-Efficiency Challenge” by reviewing Ford’s eco-driving tips. (These apply to driving any vehicle, not just hybrids.)

We then split into two teams of three people, each with a Fusion Hybrid. As my team’s driver, I turned the key in the ignition. And nothing happened. I tried again. Still nothing. Then it dawned on me that the car was actually running—there was just no revving engine sound that we’re used to. An honest mistake, but I still felt pretty silly.

My drive up to the mountain town of Nederland (20 miles away) went more smoothly. The Fusion Hybrid handled nicely and was comfortable to sit in. All the controls were easy  to see, but I left it to my friend in the passenger seat to keep an eye on our fuel-use rating while I watched the road.

And the Winner Is: Planet Earth

After both teams arrived back at the Green House after a mountain picnic, the Ford folks checked our mileage—the car displays this info for every trip—and we were the winners! We clocked in at 46 miles per gallon.

What tipped the balance? I like to think it was my feather-light accelerator foot, but the other team admitted they ran the air conditioner. (They got 41 miles per gallon, I believe.) 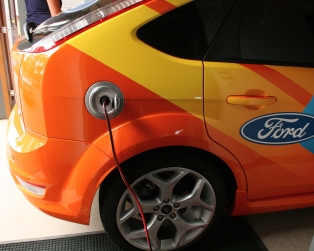 The Focus Electric uses no gas and gets 100 miles per charge.

Next, we each got a chance to drive around the neighborhood in the prototype of the Ford all-electric Focus, which had been plugged into the outlet in the garage all morning. (A full recharge is supposed to take 6 to 8 hours with a 240-volt charge station. It can also be recharged in 12+ hours with a 120-volt cord set into conventional outlets. When fully charged, Focus Electric will drive 100 miles before you juice it up with electricity.)

I slid into the jazzy orange car, pressed the “on” button (no key necessary) and away we went. I expected something radically different, but honestly, it drives and feels like any other car. However, the only sound the Focus makes is the whirring of the tires on the road.

The Focus Electric is scheduled to be on the market in 2011.