The Crans-Montana area of the Valais is home to the world-famous ski resort that overlooks a breathtaking ring of mountains. There’s also the hamlet of Colombire, whose restaurant and Eco-Museum showcase traditional foods and lifestyle from the days of cattle drives in the mountain pastures. 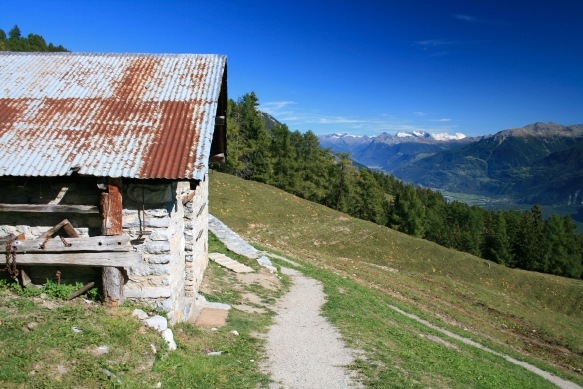 A mountain hut used by long-ago cowherds near Colombire.

(In summer, it’s hard to picture ski lifts, but you can ski to the restaurant and then continue down the slopes.)

My group lunched in the most stunning overlook possible, enjoying our hearty “Macaroni de Hameau” (a baked dish of alp cheese, cream, bacon and potatoes) with a fresh green salad and a crisp Valais wine. 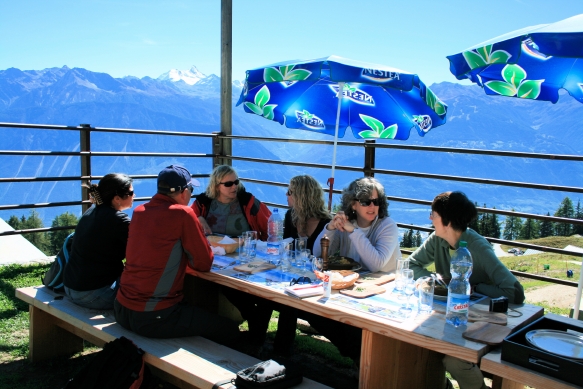 Dining with a view of the Valais alps.

(The indoor restaurant is impressive too, with great views through the windows and a cozy roaring fire during winter.) 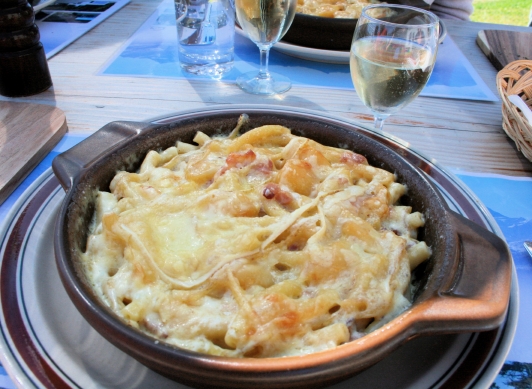 A Bit of Swiss Agricultural History

Fortified by lunch, our group learned about the Swiss life in the alpine meadows over hundreds—even thousands—of years. Guide Carolyne Renaud-A. Zufferey regaled us with family stories, local legends and history of the area.

First she took us on a tour of the Colombire mountain-pasture eco-museum. We learned how the cowherding families made spring-through-fall migrations with their livestock between valley villages, meadows and high-alp pastures.

There are several restored mayens, or meadow chalets, where the families lived in summer on display. 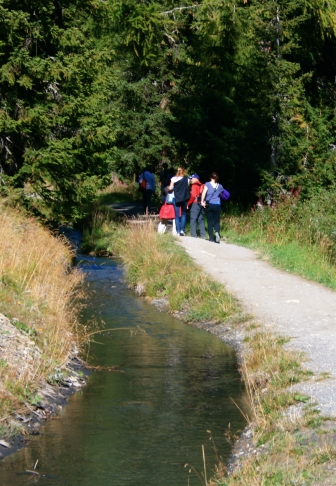 Hike along the “bisse,” irrigation canals through cow and goat pastures in Crans-Montana

Next, we hiked a portion of the Bisse du Tsittoret trail along an irrigation canal (called a bisse) built centuries ago.

What a sensory-stimulating hike on a sunny day! The smell of the firs, the trickle of water in the bisse, cow bells at a distance.

We wandered through forests, meadows, cow pastures, and ultimately to the Tieche Valley waterfall.

And, on the horizon was an unforgettable view of the Imperial Crown mountain range. 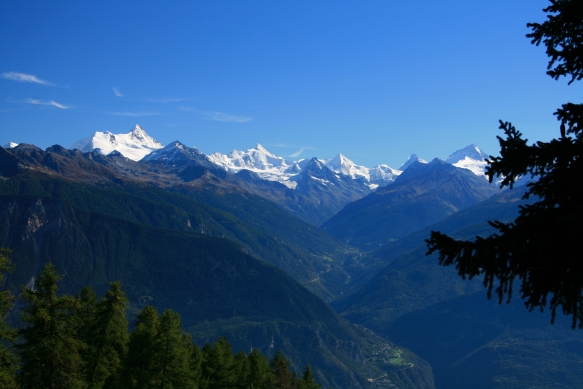 A view of the Imperial Crown mountains from the “bisse” trail.