Tigers are my favorite animal, and the ones at Colorado’s Wild Animal Sanctuary were splendid! ©Laurel Kallenbach

The Wild Animal Sanctuary is not a zoo. Yet it’s a special place where people can watch and listen to exotic animals—especially big cats, wolves, and bears.

Located on the plains of northern Colorado near Keenesburg, the Sanctuary does not exist to entertain people. First and foremost, it’s a safe, caring home to wild animals who were raised and kept in captivity; most have been rescued from inhumane cages and enclosures or from abusive circuses and zoos or breeding farms around the world. Here, they roam on acres of Colorado grasslands.

This is probably the closest thing to “home”—a true resting place of peace—that these animals have ever had. For me, the Sanctuary was an opportunity to see them living in dignity—not performing tricks or jumping through hoops or pacing in a cage or suffering other horrors at the hands of human captors. 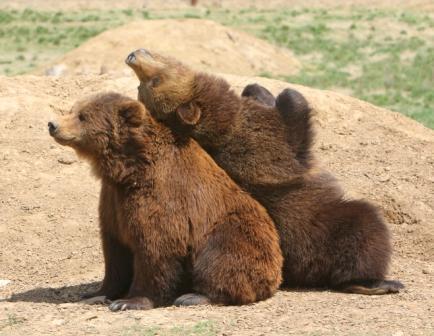 A pair of rescued grizzlies play. Photo courtesy of the Wild Animal Sanctuary

My recent trip, as part of a volunteer group that helped plant trees in the Sanctuary, afforded me the chance to be close to some of the most majestic animals in the world. Human visitors are allowed to watch lions, wolves, foxes, bears, jaguars, tigers, and more from a system of elevated walkways and observation decks. The main reason humans have this opportunity is because large-animal predators don’t consider the sky to be part of their territory, so even though they can smell and see and hear us bipeds as we gawk at them from above, the animals don’t feel threatened.

The second reason humans have the privilege of viewing the animals is that the people who run the Wild Animal Sanctuary want to educate people about the exploitation of animals. As you wander along the walkways, signs describing the conditions from which the animals were rescued are a sad testament to human cruelty. A few animals have visible scars and disabilities from having been kept as exhibits, entertainment, or pets. I was appalled to learn that there are more captive tigers in the state of Texas than live in the wild worldwide.

Susan Preiss was among our group of volunteers who planted trees at the Sanctuary. ©Laurel Kallenbach

Our Day at the Sanctuary

My husband and I pitched in for a volunteer day at the Sanctuary with Boulder Media Woman, an organization I’m a member of. We met in our grubby work clothes and hats in north Boulder and carpooled to the Sanctuary about an hour northeast of us. Just driving into the Sanctuary, we spotted tigers and bears and ostriches.

We soon set to work digging up small tree saplings from a nursery area and then we replanted them along a road in the Sanctuary. After a few hours of hot, muddy work, it was time to see the animals.

We entered the main gates and began our stroll along a mile-long elevated walkway. To my amazement, we stood just 50 feet above free-range big cats and wolves. And although the animals certainly saw and heard us, they appeared to be unconcerned about our presence. 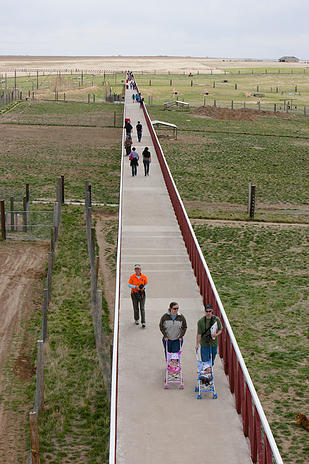 The elevated walkway at Wild Animal Sanctuary is a mile long. Photo courtesy WAS

Among the many things we learned during the day is that all animals are territorial. When strangers approach their territory, they react instinctively by either attacking in defense of their territory or by fleeing from intruders. Zoos and other facilities have fences or moats that prevent the animals from attacking visitors (aka territory intruders). Many zoos also close the doors to animals’ dens (where they would flee to safety from intruders) because the public gets upset when they can’t view the animals.

According to the Wild Animal Sanctuary, this situation of being caught between intrusive strangers on one side and restricted access from a safe den causes great stress on the animals, who begin to pace back and forth or display other unnatural and fearful behaviors. Luckily, the Sanctuary discovered that large carnivores (and many other animals) do not consider air or sky to be territory, so if people (“strangers”) are on elevated walkways, the animals do not consider them to be a threat.

Hope for the Animals

A lion rests in the shade at midday. ©Laurel Kallenbach

It could be easy to become depressed by the horror stories about animals in captivity, yet my trip to the Wild Animal Sanctuary was joyful. People laughed watching a grizzly cub playing with toys. We gasped in amazement as a pair of tigers ambled right beneath the walkway, then flopped down in its shade and took a nap. I will never forget gazing at the intricate patterns on one tiger’s stripes just 50 feet below me.

In another tiger house, where the big cats go for playtime in small pools during the heat of the days, two tigers roared at each other. We’ve all heard those roars in the movies, but standing so close to them while their roars caused earthquake-like tremors was both exhilarating and terrifying. 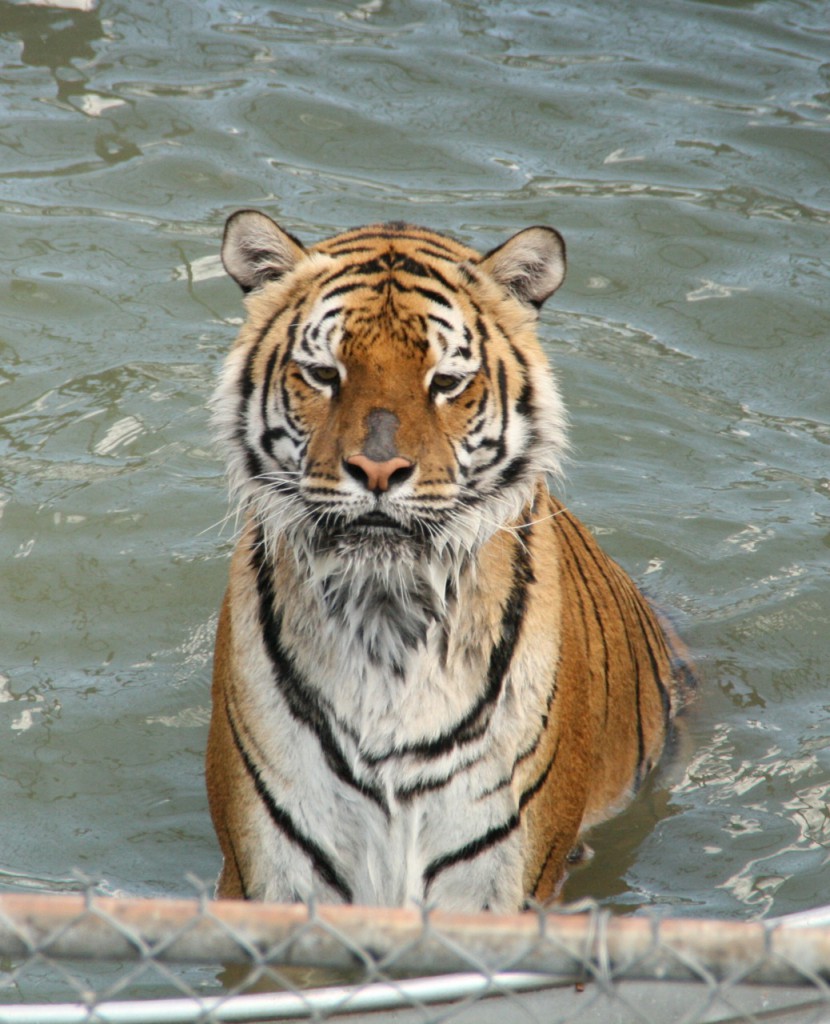 This tiger leapt and splashed in his pool, and he seemed so proud that I took dozens of photos of him. ©Laurel Kallenbach

The Wild Animal Sanctuary is the oldest and largest nonprofit sanctuary in the United States that’s dedicated to rescuing captive exotic and endangered large carnivores.

At the 720-acre refuge, the animals are rehabilitated and then released into large-acreage natural habitats.

As you can imagine, it takes a lot of money and tireless devotion to keep the Sanctuary running. To encourage donations, the organization changed its policy in the summer of 2015. Instead of a low entrance fee that didn’t even begin to defray the cost of animal care and feeding, the Wild Animal Sanctuary now has a donation structure. An Active Supporter (someone who has donated at least $200 in the past 12 months) may visit the facility free of charge and can bring family and friends. 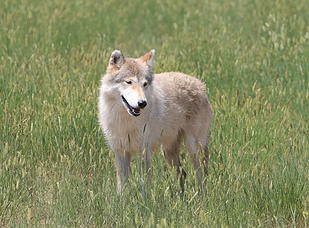 A wolf once kept in captivity as a pet is happy in her new home. Photo courtesy Wild Animal Sanctuary

Visitors who aren’t Active Supporters are considered “Prospective Supporters,” and they enter the Sanctuary by making an evaluation donation of $50 per person. Of that amount, $30 covers the cost of the visit (for maintaining walkways, parking areas, staff/guides, restrooms, etc.) and $20 goes straight to the animals’ care.

The idea is that all visitors, after seeing how the Wild Animal Sanctuary makes a difference in animals’ lives, will go on to make substantial donations to the nonprofit. Even if you can’t volunteer for the Wild Animal Sanctuary like my group did, you can “adopt” an animal or bring donations (such as bags of dog food) when you visit. Check the refuge’s Wish List for other much-needed items. 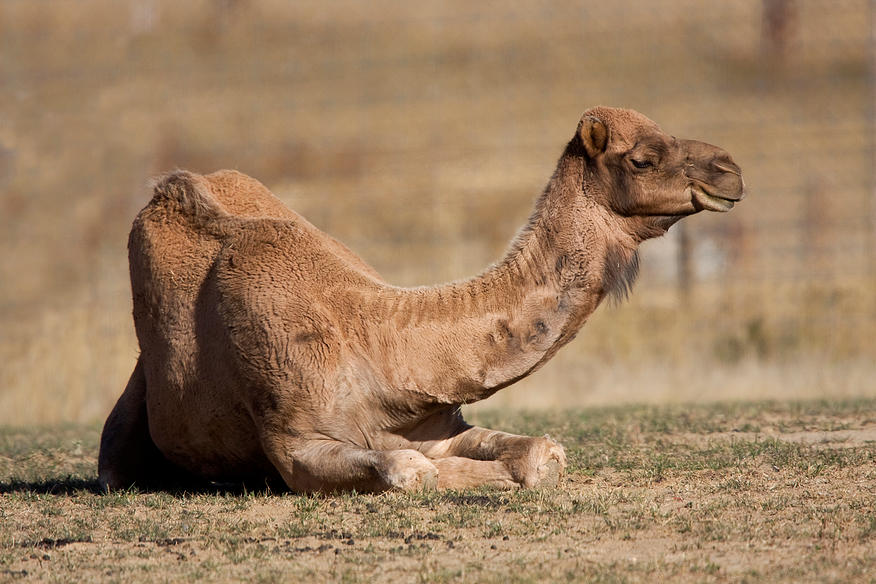