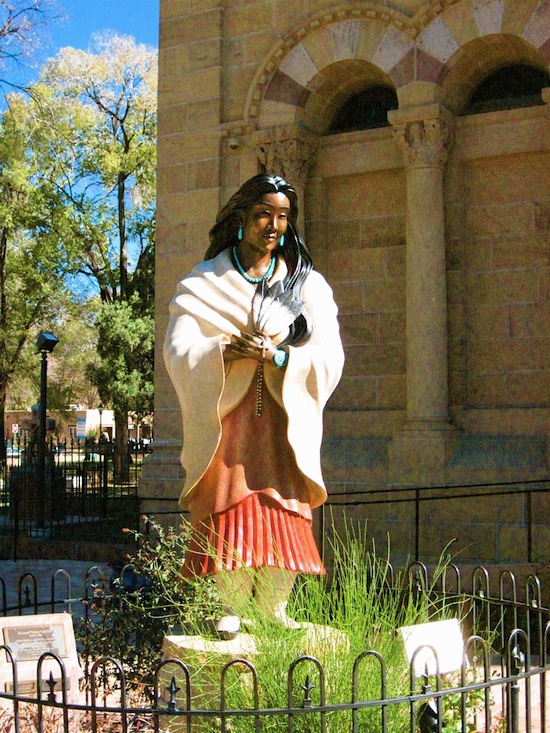 In front of St. Francis Cathedral in downtown Santa Fe is a luminous bronze statue of Kateri Tekakwitha, the first Native American woman to be beatified (in 1980) and canonized (on October 21, 2012.)

She’s also the patron of nature and the environment, which makes her pretty important in my book!

The statue is colorful, gorgeous, and full of life. No ramrod-stiff saints here.  In fact, this Tekakwitha has flowing black hair; wears turquoise earrings, necklace, and a bracelet; and she carries eagle feathers in her hand. It’s hard not to feel peaceful and encouraged about the prospect of preserving the planet’s ecosystems while beholding the serene smile of this saint.

This inspiring portrayal of Tekakwitha in her Southwestern aspect was created by Estella Loretto, a Jemez Pueblo sculptor, in 2002.

Kateri Tekakwitha is the patron saint of Native Americans and First Nations people—as well as the patron of ecologists, environmentalists, and of nature. Also known as Catherine Tekakwitha and Lily of the Mohawks, she was born in 1656 of Algonquin and Mohawk (Turtle clan) parents in New York. She died in Quebec in 1680.

The miracle that surrounds Kateri Tekakwitha is that the disfiguring pox scars from her bout with smallpox as a small child disappeared from her face a few minutes after her death. The priests who attended said she was revealed as incredibly beautiful and unblemished in death.

I hope this miracle will extend to all the places on Earth that have been blighted and disfigured by drilling, mining, pesticides, trash dumping, and toxic waste. May they be purified and made beautiful again with her blessing. 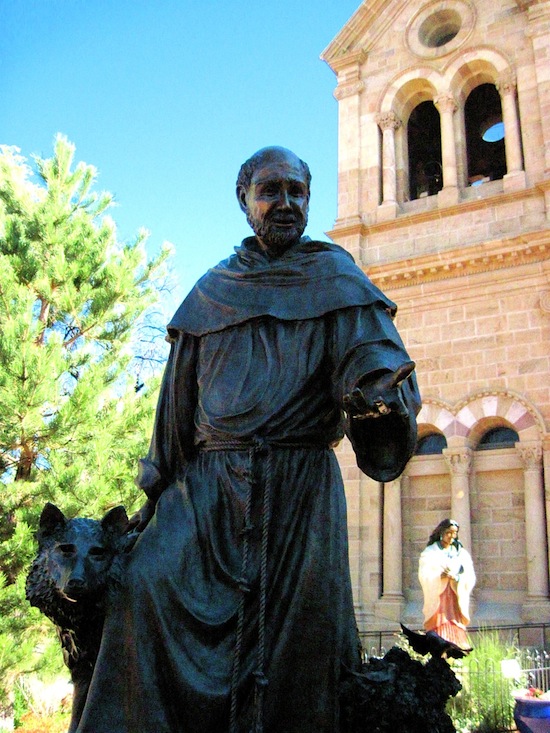 St. Francis with a wolf in front of the namesake church in Santa Fe Photo ©Laurel Kallenbach

It’s fitting that Tekakwitha is honored at the Saint Francis Cathedral, as St. Francis of Assisi was known for his love and care of animals. In fact, there’s another lovely statue on the plaza in front of the church: one of a smiling bronze St. Francis accompanied by a wolf. This artwork definitely displays the wilder side of the saint.

For 500-plus years, Santa Fe has been a spiritual center of the Southwest. Here, vestiges of native spiritual beliefs coexist with Christianity. (Well, “coexist” is actually too soft a word, as the indigenous people were subjected to forceable conversion by the Spanish. And in the 19th and 20th centuries, the U.S. government seemed hell-bent on eradicating the language and culture of Native American tribes.)

Yes, there are many ugly things to remember about how we have extinguished indigenous cultures and ravaged the land. But I take heart that there are places in Santa Fe that honor both the Native Americans and nature. It’s refreshing to see the spiritual icons of several cultures converging here beneath the eternally blue sky.

Perhaps I’m too optimistic. On the other hand, miracles do happen. 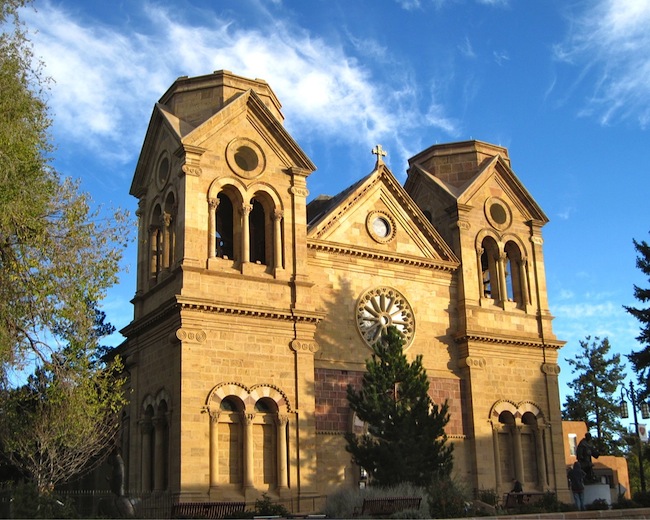