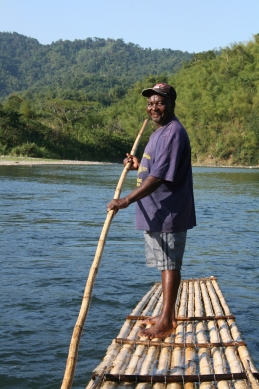 Although Burnett didn’t ferry around Errol Flynn, he has been a raft caption in Jamaica for four decades, and he gives a fascinating tour.

The best (and most tranquil) ride in the Port Antonio area is floating on a long bamboo raft toward the ocean—the antithesis of whitewater rafting.

The Rio Grande, one of Jamaica’s largest rivers, has been used to transport bananas from the interior of the island for a century or more. Rafting for fun, however, was introduced in the 1950s by Hollywood film star Errol Flynn, who lived in Port Antonio.

Two passengers sit on an elevated platform at the rear of the quaint raft while the guide stands at the front and poles you down the river. Though there are a few rapids (they were calm during my trip due to a drought), it’s a sedate trip that lets you sit back, take in the scenery, and soak up the rays. (Bring a hat, sunscreen and drinking water.)

My captain, the charming and ebullient Burnett, has poled rafts for 43 years, and he regaled me with tales of the river and pointed out landmarks and birds (herons, egrets, turkey vultures, sandpipers, snipes).

During my two-hour reverie ($80 per raft), I felt like Cleopatra. The scenery was spectacular, the temperature perfect (I went in the late afternoon, so the day’s heat was over), and the water glorious. Plus, Burnett was doing all the hard work—not me.

Along the way, there were opportunities to stop on a sandbank for swimming, but because the sun was dipping behind the mountains, we drifted on. At hot midday, a swim stop would have been divine. 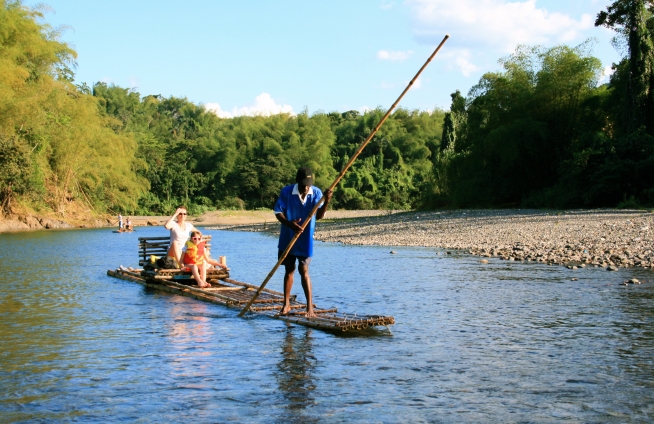 Raft captains use a pole to push the bamboo raft down the river.