The beautiful mesas and canyons of the Ute Mountain Ute Tribal Park in southwest Colorado have many secrets to tell. 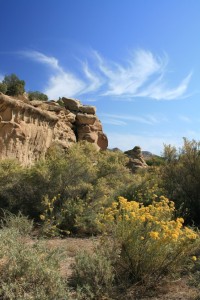 There’s the ancient epic of primordial oceans creating the flat sedimentary stone that makes up this gorgeous country. (You can still find fossilized shells and bones of sea creatures here in this now-dry country.)

There’s the story of burnished-gold chamisa (also called rabbitbrush) shining in the Indian-summer light of early October. And the sagebrush, cacti, yucca and cottonwoods (and invasive, nonnative tamarisks) growing along the Mancos River. And the cry of a hawk or crow echoing through the canyon.

There’s the mystery of Ancestral Puebloan pottery sherds, petroglyphs and cliff dwellings found abundantly throughout the park, which is on the Ute Mountain Reservation.

And there are the stories that our Ute guide, Marshall Deer, told about the distant and recent past.

Before I get to that, though, there’s also the tourism tale. A visit to Ute Mountain Ute Tribal Park is a great example of sustainable tourism.

Why sustainable? When tourism dollars go into the pockets of outsiders, foreign investors or far-away corporate owners, the money doesn’t help the local economy. The best types of “ecotourism” aren’t just environmentally friendly, they’re beneficial to locals or indigenous people. 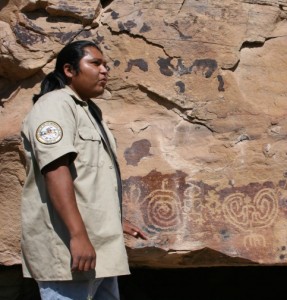 Marshall Deer explains the possible meaning of the symbols in this prehistoric petroglyph.

To experience the cliff dwelling ruins, ancient rock art and gorgeous scenery at Ute Mountain Ute Tribal Park, you sign onto a half-day or full-day tour led by a tribal member. The proceeds help support the Utes, and leading tours through this inspiring country seems a far better way to make a living than working at the casino in the nearby town of Towaoc.

How the West Was Lost

While driving and hiking through the Ute Tribal Park, I listened carefully to Marshall’s stories. He grew up on the Rez, attended college in Gunnison, Colorado, and worked on regional archaeological digs. He had many insights to share, ranging from an explanation of how to “read” a wall of ancient petroglyphs depicting the origin of the world to stories of the Wetherills, the family of ranchers who explored the ruins in the Mesa Verde National Park area a century ago.

(John Wetherill was known as the “human plumb-bob” because he dangled on a rope as his brothers lowered him over the side of cliffs to access the 700-year-old ruins.) 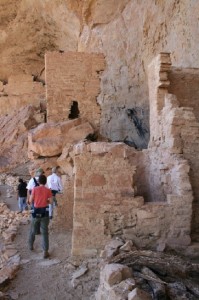 The Ancestral Puebloan ruins in the Tribal Park are about 700 years old.

There were sadder sagas too: how the U.S. Army forced the Utes out of the mountains (where they lived in summer) and into the desert mesas (their winter homes). And the tragic tale of how the Utes hid their children in the cliff dwellings from U.S. soldiers who came to forcibly remove children from their parents to take them to boarding school. There, they’d cut the children’s hair, make them wear European clothes, forbid them to speak their language, and separate them from their spiritual and cultural heritage.

(Normally, the Utes avoided Ancestral Puebloan (or “Anasazi”) sites because the Utes aren’t the descendents of those prehistoric people, who lived in the region until the mid-1200s. Modern Puebloan tribes include the Hopis and Zunis.)

I learned about the Ghost Dance, a tribal ritual performed to wash away the evil in a place. It was most done in hope of ridding the land of European oppressors. I also witnessed protest art that the Utes painted on rocks during the 1960s and 1970s.

Marshall also said something that I’ve been mulling for weeks. I asked whether young people on the Rez still speak Ute, and he said many did. He also mentioned that less than half the Ute language is written down; it’s mostly passed along orally. He made the case that if language isn’t written, then outsiders can’t use it against its speakers.

This is one reason, he said, that some Native Americans are people of few words, at least in the company of non-Natives. Marshall explained that by withholding knowledge—even by withholding their words—the Utes feel they protect themselves against cultural “invasion.” 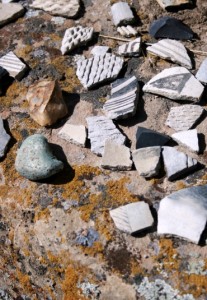 Pottery sherds are everywhere. You’re allowed to look but not to remove them from the place you found them.

“They can take away our hair, our traditions, but if we withhold our language, it can’t be taken away from us,” Marshall said.

As a woman of words, I’m sad that whole cultures are so threatened that they must to hide their words in the name of self-preservation, yet that is the case in many places around the world.

Part of me is happy, however, that some people realize that language is power, that it’s identity, that it’s the marrow of our Selves.

I’m also profoundly grateful that the Utes revere and preserve their Tribal Park land and that they’re willing to share it—and their stories, or at least bits of them—with us outsiders.

If you’d like, leave a comment about how language affects who you are or how it shapes your identity. Do you have a secret language all your own? And how does keeping it private help you? 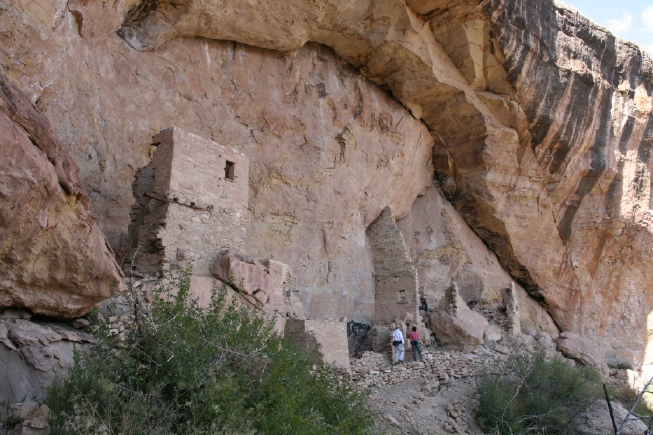 In the Ute Tribal Park, you climb ladders and hike to prehistoric Ancestral Puebloan cliff dwellings. It’s customary to thank the ancestors for your visit.