During my visit to Nashville, Tennessee, I dropped in on two historic plantations: The Hermitage, the home of president Andrew Jackson; and Belle Meade, famous for its Thoroughbred horse breeding.

Both are museums that offer historic tours through Southern mansions that are beautifully restored as they were during their 19th-century heyday—and both offer a small glimpse into the lives of the enslaved people who kept the plantations running. 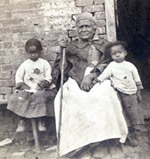 Betty and her family. Photo courtesy of  The Hermitage

Here’s the dark side: Tiny, log cabins with stick beds and rag blankets where as many as ten enslaved people lived. Posts where slaves were whipped.

Now that more attention and scholarship (historical, anthropological, and archaeological) has been turned to the lives of enslaved people in the United States, historic plantations like Belle Meade and The Hermitage are including what few stories they have about these people.

Historic People I “Met” at The Hermitage

Andrew Jackson: The seventh President of the United States (1829–1837) was nicknamed Old Hickory as much for his hard-as-wood stubbornness as for his tall, skinny physique. He was a tough guy and a staunch believer in Western expansion. Jackson was responsible for the forced relocation of the Cherokee from their eastern homelands to Oklahoma, a horrendous and fatal march called the Trail of Tears.

The Greek-Revival front of The Hermitage, Nashville. ©Laurel Kallenbach

Jackson also had a bullet an inch from his heart, embedded there during a youthful duel. Old Hickory’s heart softened, though, when he met Rachel Robards, a married woman. They married not once, but twice, because Rachel’s divorce hadn’t been legal when they first wed.

Charges of bigamy, decades after the couple was legally married, were unveiled during Jackson’s presidential campaign, and Rachel died soon thereafter, partly because of the strain and shame of the campaign.

Andrew Jackson purchased his first enslaved African American in 1794. Over the next 66 years he owned more than 300 men, women, and children—as many as 150 at one time. In the Jackson museum are photos of a few of the slaves, including Old Hannah, a house servant, whose grandson Alfred, is buried near the Jackson tomb. Alfred stayed on as a paid worker after the Civil War. I saw his cabin, refurbished as it looked in 1901 when he died. It was spare, but pretty comfy compared to the slave cabin of his earlier life.

Isaac Murphy: The most famous African American jockey of the 1800s, and one of the greatest jockeys in American racing history. He won three Kentucky Derbies and 44 percent of all races he entered.

Although Belle Meade estate is no longer a working horse farm, this Thoroughbred poses in the green fields of Tennessee. ©Laurel Kallenbach

Bob Green: In 1839, the owner of Belle Meade, William Giles Harding brought a young enslaved boy, Robert “Bob” Green, to work at Belle Meade, where the Hardings raised and raced Thoroughbreds. At the end of the Civil War, Bob continued to work for the horse farm, and he became famous for his horse knowledge. As the head groom at Belle Meade, Bob always wore a white apron, and he appears in many paintings with the family’s horses.

Coping with the Contrasts

I grew up in Kentucky, and decades ago barely a peep was mentioned about the fact that the wealth and leisurely lifestyle of white people was made possible by the forced labor of African Americans. Slavery was politely overlooked when I was a kid in the South.

Things have changed, and I’m glad that plantations make an effort to tell (as best they can) the mostly untold and still mostly anonymous stories of enslaved people. Still, the acknowledgment of the horrors of the past can be discomforting. It’s much harder to revel in the beautiful aspects of elegant homes and gardens knowing that they were rooted in intense human suffering.

It’s easy to point fingers at the ugly heritage in Dixieland, but the truth is that northern cities such as New York were built by slave labor. So was the White House and the U.S. Capitol in Washington, D.C.

So, how does a visitor reconcile the dichotomies? At The Hermitage and Belle Meade mansions, I saw wedding portraits and libraries filled with leather-bound books. In slave quarters, it was illegal for people to marry or read and write.

I must admit, though, that I was quite taken by the hand-painted French wallpaper in the foyer of The Hermitage depicting nymphs and goddesses from ancient Greece. And I loved seeing the portraits of racehorses—the ancestors of Sea Biscuit and Seattle Slew—lining the walls of Belle Meade. And sitting on a rocking chair in the shade of the mansion’s porch, was a treat. I did enjoy experiencing all this, yet I was uneasy with that enjoyment.

The gravestone of Alfred Jackson (Uncle Alfred), who lived at the Hermitage longer than anyone else, black or white. After emancipation, Alfred continued to work at the plantation, and he asked to be buried beside Andrew Jackson’s tomb. ©Laurel Kallenbach

That’s what makes visiting historic places important: they can delight us, but they can challenge us too. And, ultimately, they make us look at where we are today in a new light. We still live in a world with huge economic and social discrepancies. Slavery and human trafficking exist even now.

So, despite the sad and awful tale that must be told of plantation life in the South, it’s better to come, and see, and enjoy, and learn, and grieve. That’s what history has to teach us.