Not far from the ancient megaliths of Stonehenge in the Wiltshire countryside, is the city of Salisbury, home of Salisbury Cathedral, another magnificent achievement of sacred architecture.

Set in the largest Cathedral Close in Britain—it covers 80 acres— Salisbury Cathedral is well known for its iconic spire and for being home to one of the four copies of the Magna Carta.

The ornate spire was built between 1310–1330 and is octagonal in shape. It rises 180 feet above the tower, making the combined height from ground level 400 feet—the tallest in Britain.

Imagine the awe of people during medieval times when they saw this amazing cathedral spire from every hill and valley within miles.

Back when we visited in 2012, Ken and I were staying at the historic Rollestone Manor in Shrewton, just two miles from Stonehenge. To get to Salisbury, we drove to a nearby park-and-ride and took the bus into Salisbury. Though it’s a small city, we dislike driving on the left side of busy roads, and finding parking is always tricky. So it was delightfully relaxing to hop on the bus, which stopped just a few blocks of the cathedral.

Buskers in the city of Salisbury ©Laurel Kallenbach

As we strolled through the old part of Salisbury, we enjoyed seeing the pretty shops and historic buildings of the town. And we paused to listen to buskers playing along the way.

When we arrived, the cathedral was fairly quiet, so we opted to see the Magna Cart first before the crowds arrived. The Magna Carta (Latin for “Great Charter”) has been called a “cornerstone of liberty.” It’s one of the most celebrated documents in English history, and its revolutionary content influenced European civilization—and much of the rest of the world.

Written in 1215, the Magna Carta was signed to avert civil war in medieval England. Negotiations took place on “neutral” territory at Runnymede, near the royal castle at Windsor. In the Magna Carta agreement, King John guaranteed many rights that his officials had previously disputed, including freedom of the Church, the rights of towns, and that justice could not be bought or sold. 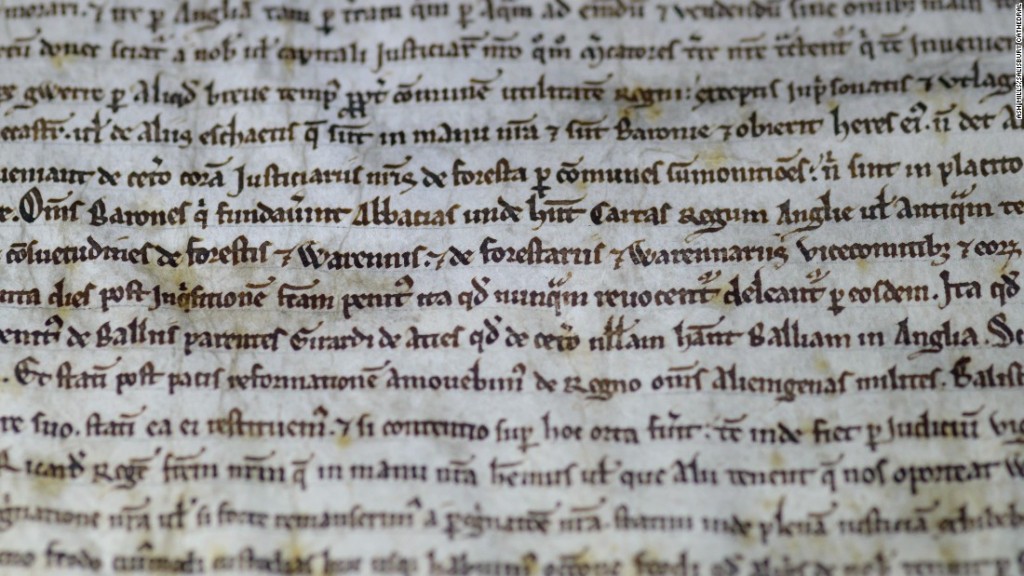 Only four copies of the Magna Carta have survived the centuries, and Salisbury Cathedral is home to the best-preserved original manuscript. Because the pages are kept securely behind glass that also shields them from the light, it’s a bit difficult to see them, but even thick glass can’t diminish the fact that these words, penned a little more than 800 years ago, changed the world and were an important step toward establishing basic human rights.

The New Amid the Old

We went outside into the cathedral’s beautiful cloisters and sat for a bit on a bench enjoying the fresh air and reflecting. After seeing the Magna Carta, those lessons in elementary-school world-history class seemed much more relevant.

We searched for a bit to find the peregrine falcons that sometimes hunt around in the cathedral, but we didn’t spot them. So we dodged a rain shower and went back inside to see the cathedral itself.

There are indeed many beautiful traditional stained glass windows, but we paused in the Trinity Chapel to admire a modern stained glass window dedicated to prisoners of conscience. Created by artist Gabriel Loire of Chartres, France, it depicts the crucified Christ as an archetypal prisoner of conscience. Nearby burned an Amnesty International candle surrounded by barbed wire. That chapel was a wonderful reminder that human rights aren’t just something established long ago—they are values we need to redefine and create and protect all the time, in every country of the world.

Stillness and flow: Two contrasting aspects of water are woven together in the church’s baptismal font: the calmness of the reflecting surface and the flow and movement of water through the four spouts. Salisbury Cathedral’s modern baptismal font was created by artist William Pye. ©Laurel Kallenbach

Created by renowned British water sculptor William Pye, the cruciform-shaped baptismal font was installed in 2008 to celebrate the 750th anniversary of the consecration of Salisbury Cathedral.

I loved how the water’s smooth surface reflected the surrounding architecture before passing through spouts at each of the four corners and disappearing through a bronze grating set into the floor. It was rather mesmerizing to look at.

I highly recommend a visit to this fantastic monument. It would be lovely to come at a time when you can hear the choir filling up the huge space with song. And incidentally, I read that Salisbury Cathedral was the first cathedral to have a girl’s choir in addition to the traditional boys-only choir. I’ve always wondered why only boys had the privilege in contemporary times. Just another example of human equality at work in this great church!