No good hotel is complete without an innovative restaurant, and Hotel Mocking Bird Hill’s Mille Fleurs is just such a place. I savored every mouth-watering bite during my stay there—and each was both sustainable and satisfying. 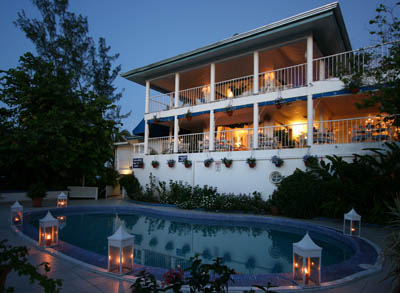 Unlike many Caribbean resorts that import the majority of their food, Hotel Mocking Bird Hill cooks with locally grown and harvested ingredients whenever possible, thereby supporting local farmers and putting fresh, tasty, and usually organically-grown foods on guests’ plates. Chef Melvin Laidlaw and the hotel’s owners also seek out foods that originate from within 50 miles, occasionally widening that to 90 miles when necessary.

The Mille Fleurs adventure begins before your first dinner at the hotel when Chef Melvin sits down to tell you what’s on the menu (it changes daily, depending on what’s in season). He also explains the origins of all the foods and describes Jamaican specialties such as callaloo (a green, leafy vegetable—like spinach—that’s simmered with coconut milk, chopped onions and garlic).

Chef Melvin also asks about your dietary restrictions or preferences. If you’re gluten intolerant, you’re in luck. Cassava, a starchy root that grows in the tropics, is a Jamaican staple—and cassava flour is gluten free. It’s the primary ingredient in Jamaican coconut-milk-fried flatbread called “bammy”—which is heaven!

Candlelit by night, Mille Fleurs restaurant creates romantic atmosphere on its terrace overlooking the Caribbean Sea and rainforest—with the Blue Mountains on the horizon. I loved sitting with a rum drink as the sun set, feeling the cool night breeze and watching the fireflies glow.

To give you a sample of the outrageously good food, my first night’s meal include an orange salad with green olives and local feta* accompanied by fresh-baked herb rolls and scones. For the main course, I chose spiny Caribbean lobster, served with herb butter. (Note: I visited Hotel Mocking Bird Hill in late March, the last days before the close of lobster-catching season. April 1 through June 30 is the lobster’s breeding/egg-laying time, and if you eat lobster between those dates, chances are they’re poached—and I don’t mean in the cooking-method sense!)

To top off the meal, I reveled in a sampler platter of Mango Cheesecake and Papaya and Jamaican Apple & Coconut Custard.

I also have to mention that Chef Melvin pampers vegetarians and vegans with Jamaican flavor. On any given day, the menu might include Stir-Fried Callaloo with Garlic, Breadfruit and Peanuts; Spicy Okra and Tomato with Yogurt; Herb Pancakes Filled with Ratatouille and Feta; or Homemade Pasta with Spicy Pumpkin Sauce.

* I’m compelled to sing the praises of the artisan cheeses served at Mille Fleurs. They’re crafted at Jamaica’s Tamarind Hill Farm by Joanna Slimforte and they’re spectacular. I’ve never tasted such vibrant feta outside the Mediterranean, and the goat cheeses vie with Europe’s. 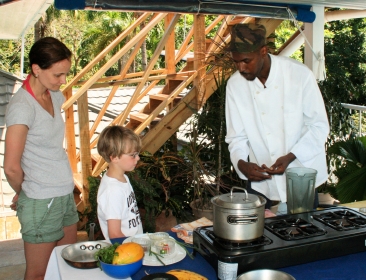