The spires of Highclere Castle set the elegant tone of the PBS Masterpiece TV series Downton Abbey (see my post: “My Pilgrimage to the Real Downton Abbey”) but fans of the show and movie want to know more. Anytime one of the show’s characters has business in Downton village, the Oxfordshire town of Bampton gets its turn in the spotlight.

As of 2013, a fair, two weddings, and a funeral have been among the big events filmed in Bampton, just 20 miles west of the city of Oxford. When my husband and I discovered that the National Trust cottage we rented for three days was just 15 minutes away, we were ecstatic that we could see another piece of Downton Abbey lore.

We arrived in town just about teatime, parked in the market square, and had tea and scones at the Bampton Coffee House. There we got directions, but as we left, the church bells began tolling exuberantly.

Bampton’s church has been the setting of Grantham family weddings. ©Laurel Kallenbach

We simply followed their sound as we wandered down pretty Church Street until we arrived at St. Mary the Virgin, a 12th-century parish church with Romanesque architecture. No doubt about it: this was the church where Lady Edith took Matthew sightseeing during Downton Abbey’s season 1—when she was hoping he would woo her instead of her sister Mary.

The church’s TV-land alter-ego is St. Michael’s and All Angels, and its interior and exterior have appeared on American tellies most famously as the scene of Lavinia’s burial (season 2), Mary and Matthew’s nuptials (season 3), and Edith’s jilting at the altar (also season 3).

On the August afternoon we visited, the church bells were pealing for a real wedding. We watched as the bride and groom had some last photos taken before braving the gauntlet of rice-throwing wedding guests and into a vintage Rolls Royce.

I’m standing at the gate where Lady Mary entered the churchyard for her wedding to Matthew Crawley. ©Ken Aikin

Then Ken and I wandered inside the church as the wedding candles were extinguished and the flower arrangements carried away. The sanctuary has a lovely pipe organ, elegant stone arches, vaulted ceiling, stained glass, and ornate pews. (We also picked up a free, photocopied guide of Downton Abbey locations in Bampton, which helped us with the rest of our impromptu tour.)

Outside, the little churchyard is dotted by lichen-covered tombstones and a few red-berried hawthorns. We speculated that Matthew and Mary would be wed in this church—but we had to wait until January 2013 to confirm that.

Strolling with the Granthams and Crawleys

All the Downton Abbey scenes filmed in Bampton are confined to the picturesque Church View lane, a row of old buildings, houses, and stone walls. Right beside the church is Churchgate House, which serves as the exterior for the Crawley house where Isobel and Matthew lived. (The interiors are filmed elsewhere.)

This bench shows up in a number of Downton Abbey episodes. ©Laurel Kallenbach

Just outside the churchyard walls is the church green—with a huge tree and park bench that often shows up in the TV series. This area was the setting for the fair, which was featured in a season 1 episode in which Mrs. Hughes, the housekeeper, met an old beau.

Next comes the Bampton Library, which for TV’s purposes sheds its literary facade and poses as a medical building. The library is the exterior for Downton Hospital where Dr. Clarkson treats villagers and the wounded soldiers during WWI.

Bampton Library, just down the block from the church, serves as the exterior for Downton Hospital. ©Laurel Kallenbach

So, when Mrs. Hughes walks up to the hospital for her cancer checkup, that’s Bampton’s library you see. If it’s open, visitors can go in; the library sells souvenir postcards and Downton Abbey books there.

[Nice to know: The library might have closed by now from lack of funding for upkeep and repairs, but donations are helping save it, including a £20,000 donation to the village of Bampton from the Downton Abbey production company and fundraisers endorsed by cast members (including actor Hugh Bonneville).]

Finally we ambled down Church View Road, noticing doorways that become the Downton Post Office and the Dog & Duck pub. It’s fun seeing locations that look vaguely familiar…but not quite. After we returned to the States, we watched reruns of the early episodes and paused the DVD player so we could see spots where modern fire hydrants were covered by bushes or fake postboxes to complete the early-20th-century look.

Before the Downton Abbey craze hit, Bampton was a sleepy town known for its morris dancers (traditional folk dancers who wear bells on their shins), its May flower-garland festival, and the colony of swifts that nests in the village every summer. Bampton was quiet when we visited in 2012, but with the show’s popularity, tour buses now stop there.

Bampton, in Oxfordshire, is a beautiful village. ©Laurel Kallenbach

Bampton, one of England’s oldest towns, has a number of pubs, inns, and B&Bs, so it would be a nice place to spend a few days. (It’s within an easy drive or bus ride from other quaint Oxfordshire Cotswold villages such as Burford, Lechlade-on-Thames, and Minster Lovell, so there’s plenty to do in the area.) 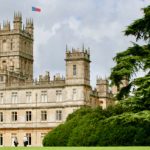