Salt, a restaurant opened by visionary chef/owner Bradford Heap in 2009, is a culinary delight with a conscience for preserving natural resources. 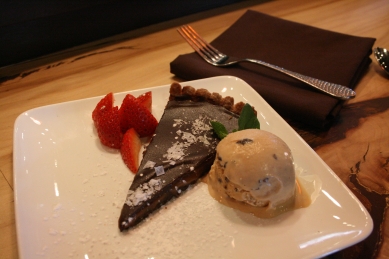 Save room for Salt Bistro's Chocolate Caramel Tart, sprinkled with (what else?) salt.

Located on Boulder, Colorado ’s Pearl Street, Salt Bistro was created in the historic space that was formerly the home of Tom’s Tavern, a downtown landmark for more than 40 years. While renovating the restaurant for his new bistro, Heap and his wife, Carol Vilate, a designer, reused as many elements from the original building as possible—an effort that imbues Salt Bistro with a sense of the past—and that reduced the need for new materials. The tin ceiling was original from the 19th century.

In addition, the couple used recycled materials whenever possible. Look closely at the wooden tables: They’re made from old doors taken from Boulder’s Casey Junior High during its remodel. The chairs came from an auction. Wood flooring and many other finishes came from Resource Reclaimed Building Materials, a local business. 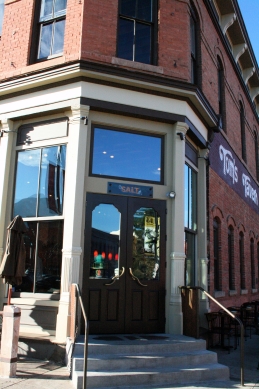 Salt, a bistro in Boulder, Colo., is located in the Pearl Street building that once housed Tom's Tavern.

The handiwork of local artisans resulted in a restaurant that feels both modern and old-fashioned, European and American Western. And that’s borne out in the food: the bar “chefs” offer a selection of pre-Prohibition cocktails, and the entrees present old-world flavors suited for contemporary palates.

Sustainability isn’t just for the interior design of Salt Bistro—it’s a huge part of the restaurant’s food philosophy. The menus are built around seasonally available local food—much of it organic—in order to capture the freshest flavors.

Heap aims to raise awareness of where food comes from, and the menu lists the farm source of each menu item. In addition, the restaurant features sustainable seafood and humanely-raised meat.

But how does all this taste? Executive Chef Kevin Kidd pulls out the stops with fare that displays Italian and French influences with an American flair. An artisanal cheese plate spotlights local Haystack Mountain goat cheeses. The Wood-Roasted Autumn Vegetable Cassoulet features bounty from Munson Farm, while the Seven-Hour Braised Colorado Lamb with fennel risotto comes from Rosen Farm.

I personally wouldn’t miss getting a side order of Salt’s Crispy Polenta—by far the most divine I’ve ever tasted.

Salt’s menu rotates seasonally, but some things should never change. That’s why you can still get a Tom’s Tavern Burger, which Salt has gussied up with grass-fed beef, Grafton cheddar and house-made fries. 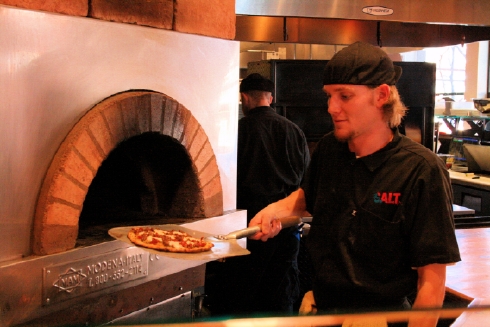