Eileen balances in Tree Pose beneath the flowering trees at Bromley.

A late-March blizzard began to blanket Colorado in snow as I left Boulder for the airport. Luckily I was on my way to Jamaica for a weeklong creative writing and yoga retreat.

The retreat was led by two writers/yogis, Jacqueline Sheehan and Celia Jeffries and was organized by Patricia Perkins of Tropical Escapes.

Our headquarters for the week was Bromley, a historic cattle estate house in the hills about half-an-hour’s drive away from the beach and cruise-ship-port town of Ocho Rios.

Far away from that crowded scene, Bromley feels like a dignified matron from a bygone century. In fact, the stately 17th- and 18th-century house is built on the foundations of a 16-century Spanish stone fort, so she’s seen a lot of comings and goings since Europeans first came to Jamaica.

Even the name, Bromley, evokes the romance of a Victorian novel. 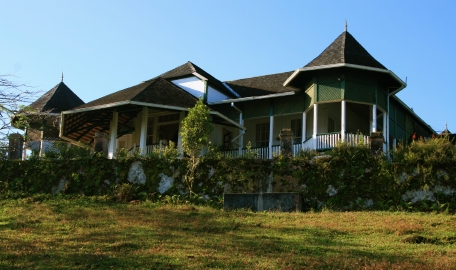 Bromley perches on a hilltop overlooking the village of Walkerswood, famous for its jerk seasoning, in St. Ann’s Parish, Jamaica.

Bromley’s high ceilings, open windows and deep verandahs are classic Caribbean architecture—designed to keep it cool in the hottest of weather. So brisk were the hilltop breezes that during evening writing sessions (held in the living room) we winter-grizzled Americans wrapped ourselves in shawls. 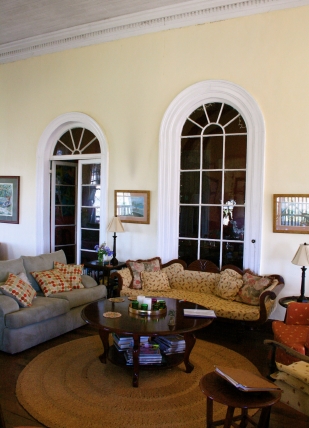 We held the group writing workshops in the living room, although many of us migrated to the porches to write.

Bromley has three gorgeous, sunny bedroom suites upstairs with old-fashioned four-poster beds. I opted for the less-expensive digs downstairs in the “Fort,” but I secretly coveted one of the upstairs accommodations.

My room was cute and cool (thanks to the thick, Spanish-era stone walls), but because the windows were primarily gun slits, it was a bit dark. My parched skin and sinuses loved their vacation from Colorado’s ultra-dry climate, but I have to admit that I prefer my bed sheets a little crisper than they were in the damp, ground-floor Fort.

Bromley is surrounded by lush gardens, and morning yoga was a treat held on a covered platform amid flowering boughs and bird song. Some of their squawks made even the most serious of yoga poses seem hilarious. One pair of birds called out with what sounded like a cross between Chip and Dale chipmunks and turkeys gobbling. It was a thrill, however, to spot iridescent doctorbirds (Jamaica’s national bird, also known as the swallow-tailed hummingbird) zipping among the blooms as we balanced in Tree Pose. 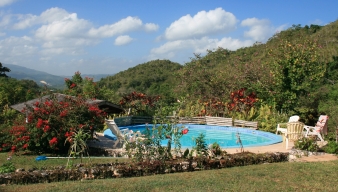 Pool with a view

Reading beside Bromley’s pool, which overlooks the verdant valleys of the Diablo Mountains, was popular during the retreat. If you got too hot, the refreshing water waited, and every time you looked up from your book, flowers or one of the owners’ dogs were there to greet you. 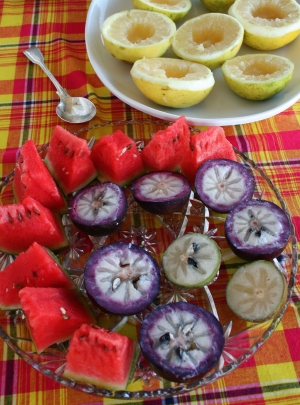 Each morning, fresh tropical fruits and steaming cups of Jamaica’s Blue Mountain coffee greeted us for breakfast — followed by other delectables including omelettes with callaloo (a green vegetable like chard or spinach) and gluten-free cassava pancakes (cassava is a starchy root also called yuca or manioc). One morning our group was treated to a typical Jamaica breakfast of saltfish. I was glad I tasted the dish, but fish in the morning just isn’t for me.

Fish for lunch is a different matter entirely. One of my favorite dishes was a coconut-crusted fish with sweet potato fritters. Delish! We also enjoyed a lovely Run Down, a famous dish in Jamaica that involves cooking either meat, fish or vegetables in coconut, Scotch bonnet peppers, onions and other spices.

All this fare was home-cooked by served by a friendly, helpful Bromley staff. We definitely ate well and got a chance to sample Jamaica’s flavors. 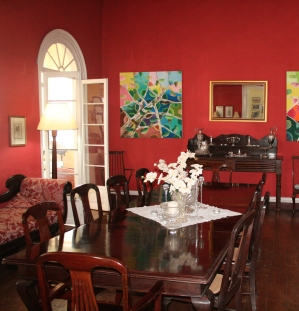 Bromley’s formal dining room was the site of dinner every evening.

In between all the eating, the lounging, and cocktail hour at sunset — the retreat favorite was rum and Ting (a Jamaican grapefruit soda) — there was yoga and writing, of course. Collectively, we women created wildly-ranging tales about tribal shamans, 1950s-era Irish Catholic families, memoirs of past Jamaica visits, Saharan Blue Men, family funerals, the Kentucky Derby, and stories of love and healing and of joyful, resilient children.

The words we strung together and read aloud during our week at Bromley were surely nourished by the rains, encouraged by the Jamaica sun, fertilized by vines and ferns. We all came on the retreat for some R&R, some beach time and to exhale. We got so much creative inspiration in return. 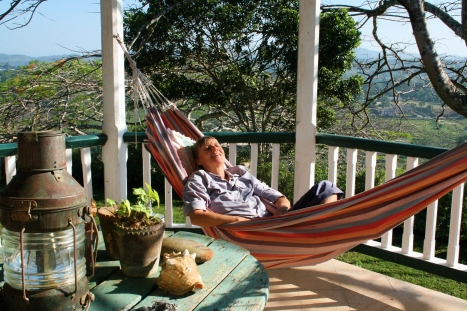 Sandy contemplated the next chapter of her memoir while swaying in the hammock on one of Bromley’s verandahs.