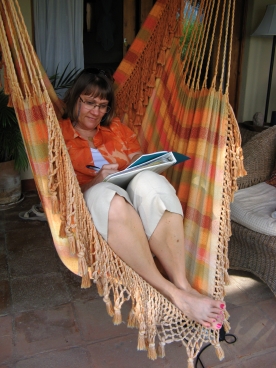 I wrote from the hammock on my patio at Villa Sumaya retreat center in Guatemala.

A few weeks ago, I went on a trip that ranks high as one of my favorite types of travel: a weeklong creative writing and yoga retreat. (In my next post, I’ll relate the details of this recent getaway — in Jamaica! — hosted by Writing Journeys and Tropical Escapes. First I want to wax poetic about the wonders of writing retreats!)

Back in early 2001, I noticed a small classified ad for a creative writing / yoga retreat in the back of Yoga Journal. What could be more perfect? Here was an opportunity to combine my passion for travel with the relaxation of doing yoga and with the luxury of having time to write twice a day for an entire week.

At the time, I was frustrated because I hadn’t managed to wedge much “creative” writing into my schedule since I finished my master’s degree 11 years earlier. So I signed up with Patchwork Farms retreats and headed to a rural Mexican fishing village of Yelapa, near Puerto Vallarta. 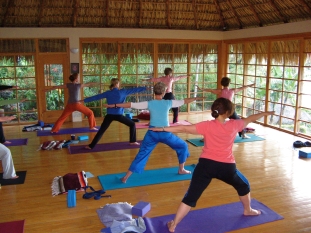 Led by poet and writing teacher Patricia Lee Lewis and yoga teacher Charles MacInerney, that retreat gave me the opportunity to stretch both my muscles and creativity while staying in a palapa, an open-sided, thatched-roof shelter.

My first retreat also exposed me to the Amherst Writers and Artists (AWA) method of writing, which practices the philosophy that every person is a writer and that every writer deserves a safe environment in which to experiment, learn and develop craft. With this approach, writing is fun, and everyone — from beginner to professional — writes something profoundly moving or funny during the week.

Writing sessions (done twice a day) go like this: Our group (including the leaders) write together for a set amount of time (perhaps half an hour) and then read aloud what we’ve just written. Then the group responds — not critically but gently — by pointing out what they liked about what they heard and what parts from the writing stood out. 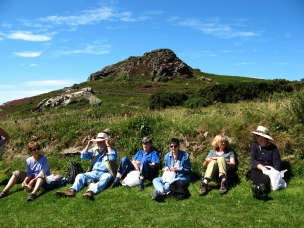 Our group worked on our Welsh suntans and enjoyed a picnic lunch while sightseeing in Pembrokeshire (summer, 2007).

According to the AWA, this practice “enables participants to expose aspects of their creative minds that may have been inaccessible, leading the writer to his or her truest voice, and fostering the power to use it.”

I’ve become addicted to the destinations and the wonderful people who run and attend these yoga and writing getaways. Since my first Mexico experience (I’ve returned to Yelapa three times), I’ve attended similar retreats in Guatemala, Ireland, Wales, and now Jamaica. In the process, I’ve discovered magical places, including the St. Non’s Retreat Centre on Wales’ Pembrokeshire coast, Los Naranjos jungle retreat in Yelapa, and Villa Sumaya on Lake Atitlán in Guatemala. 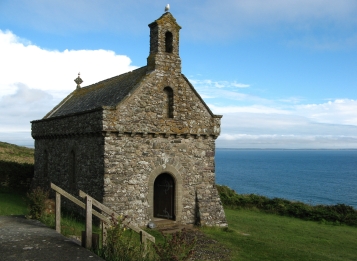 St. Non’s Retreat Centre in Wales is a magical place to write and do yoga.

There’s plenty of free time on retreats, and the group always goes sightseeing. In Ireland, we hopped a boat to remote and mythical Tory Island, which still has its own king who greeted us on the dock and invited us for dancing and a pint at the local pub.

In Guatemala, we visited the Mayan town of Santiago de Atitlán to visit the fabulous weaving markets and to see Maximón, a cigar-smoking, scarf-adorned folk saint (a blend of a Mayan god and Catholic santo). And in Wales, we explored Neolithic dolmens and a sacred tree that bleeds.

Perhaps even more important is the undiscovered territory I’ve explored within. Every morning of these retreats starts with yoga, taught for all levels so you can go as deeply or gently as you like. In this loose, relaxed state, I’ve often grabbed my notebook and let the sentences gush from my pen. Forty minutes later, the leader rings a bell to signal the end of this writing session, and I feel as if only moments have passed.

Over the years I’ve transformed from frustrated wannabe author to actually creating a novel. I’ve heard bits and pieces of other writers’ novels in the formative stages, and now, thanks to the work and environment of these AWA retreats, I actually believe myself to be a novelist. 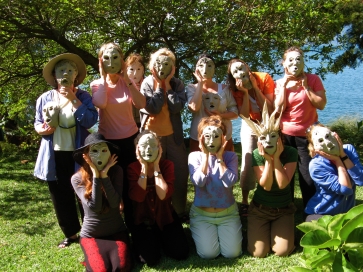 Our group of yogis/writers sculpted and fired clay masks (Guatemala, 2008).

Whereas I first signed up to prod myself into writing fiction or poetry again, now I go to these retreats to work on scenes from my own novel. In fact, on my second retreat, I wrote a piece (right after a guided meditation) that turned out to be the seed for my novel.

This time in Jamaica I challenged myself to write some really emotionally draining passages from that novel — they were still tiring and hard work, but the environment sustained me.

The combination of yoga, good food and writing recharges my creative batteries. Creativity just seems to blossom where nature, art and movement intersect — and it can happen in any landscape: a beach, a jungle, a field of heather.