A quintessential California surf town, Ventura has a laid-back vibe and down-to-earth soul that some people say feels more like “authentic” California. 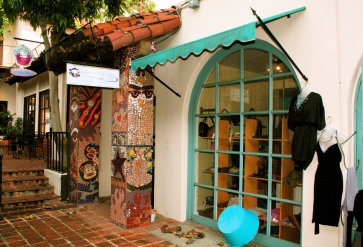 Ventura’s got far less glitz—and lower prices—than Los Angeles, directly to the south. And with a population of just 100,000, it’s easy to navigate and retains a smaller town feel.

I loved its architecture, its outdoorsy atmosphere with emphasis on sustainability (eco-company Patagonia is headquartered here), and its downtown, which has a lot of character.

Here’s a tour of some in-town spots. 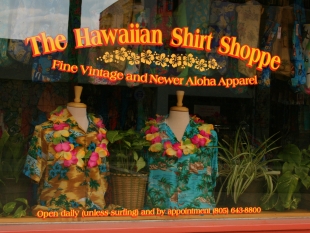 Get your surfer gear here!

The lettering on the window of the Hawaiian Shirt Shop, “Open daily unless surfing” says it all. The shop was closed when I was there. Could the shopkeepers be out hanging ten?

The San Buenaventura Mission (Ventura’s official name is “Buenaventura,” which means “good luck” in Spanish) was founded in 1782 by Father Junipero Serra, the last of the historic California missions. 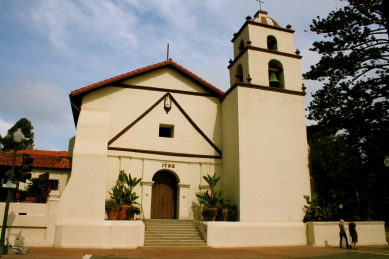 A statue of Father Junipero Serra stands in front of the stately Buenaventura City Hall. 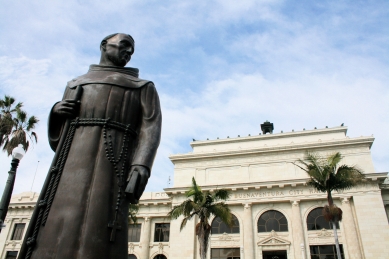 A great downtown lunch spot is the Anacapa Brewery, which serves hand-crafted ales and lagers produced on site. All the salads and appetizers were nice and fresh, and I tried the taster flight of beers ranging from a pale wheat to a dark espresso stout. 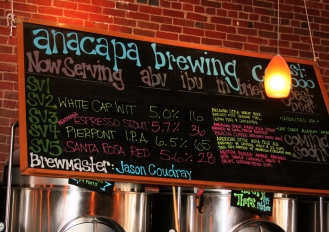 Menu of local microbrews at the Anacapa Brew Pub

The Watermark on Main, an elegant downtown restaurant, was originally the Ventura Guarantee and Loan Company building constructed with gorgeous tilework and balcony grillwork in the 1920s. It gets my vote for most historic atmosphere. 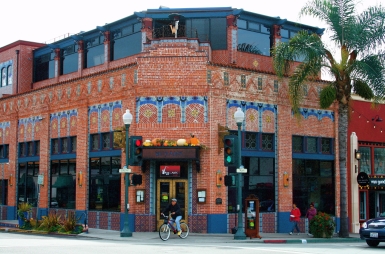 The Watermark Restaurant in a beautiful historic building

This pirate sign below was in the front window of a Ventura shop called Sea Things, which sells seashells and ocean-inspired gifts and jewelry. 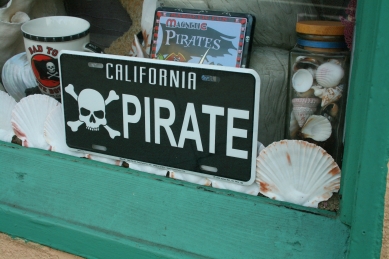 In the window of the Sea Things store 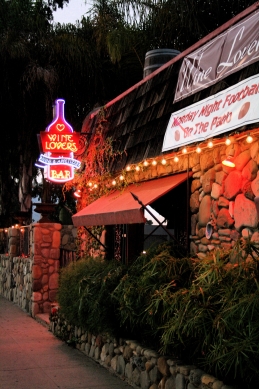 The neon signs at Wine Lovers

Although it’s a drive from downtown, the Ventura Harbor is a fabulous place to go at sunset. You can watch the fishing boats come in and ogle the docked sailboats in this picturesque marina. Many of their names intrigued me and made me envision the type of person who owned the boats. Names included: Hold My Calls, Wizard of the Winds, Dragon Rider. 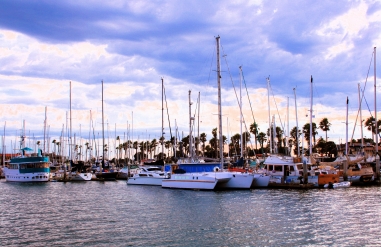 The Harbor is also home to the Four Points Sheraton hotel where I stayed. It’s a comfy place with a slightly nautical ambiance and views of the harbor that can be enjoyed from balcony rooms.

Local author Sondra Briggs took my friends and I on a harbor meditation walk during which we cleared our minds and let our senses smell the sea air, feel the rain on our faces, notice the wind on palm fronds, and contemplate the international flags on the boats, thinking about all the places they’d been.