Places I find most magical are in countries with either a very ancient history or where people have a different sense of time—where a day is measured by afternoons rather than nanoseconds.

So in 2004, I made a pilgrimage to Ireland, a nation of storytellers, where you can still hear tales about encounters with fairy folk, where upscale housing developments might still be named for an ancient queen or saint, where you fetch the gate key to a 6,000-year old stone passage tomb at the espresso shop down the hill. 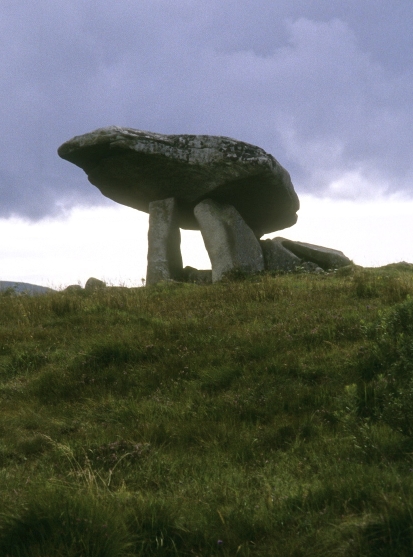 I’m a bit obsessed with standing stones, you see, and Ireland has so many!

One morning, I clomped in vain through thigh-high grasses searching for a sacred well along Donegal’s cliffs overlooking the Atlantic. (Wells like these were used in pagan and early Christian times for healing.) Frustrated, I decided to skip my next itinerary stop and head to my B&B for an afternoon nap.

As I drove past the road sign pointing to Kilclooney, just 15 miles away, I made a U-turn (not so easy on Ireland’s narrow rural roads!), and took the route leading to Kilclooney’s dolmen, which is a huge stone table built over a tomb entrance.

At the village of Kilclooney, I pulled into a church parking lot and walked to the farm gate across the street—following my trusty guidebook, The Traveller’s Guide to Sacred Ireland by Cary Meehan (I can’t recommend this one enough!).

The rough farmhouse road/path lay behind the gate—where two large red cows stood sentry, menacingly chewing their cud (or the remains of the last pilgrim they had thwarted!). I followed the guidebook’s instructions and knocked on the stone farmhouse door.

“Is this the path to the dolmen?” I inquired of the elderly lady with a cane who opened it.

“Yes, yes,” she answered with a welcoming smile. “Go through the gate and up the hill a way,” she said.

“There are cows?” I stammered.

The woman must have read my mind: “Ah,” she said with a wave of her hand, “Don’t worry about the cows; they won’t touch you.”

Guardian at the Gate

So I set out, opened the gate, and sidled toward the bovine guards, eyeing their horns. I had come all this way, and I couldn’t stand the thought of losing both the sacred well and the dolmen in one day.

At that moment, a black lab bounded through the fence, barking and nipping at the cows, who grudgingly yielded the path. I petted the wagging dog, my hero, then she began bouncing up the trail toward the dolmen.

So I had a four-footed guide, who soon presented me with a reddish rock, dropped it at my feet and stared pointedly at it. On Ireland’s farmland, trees and sticks are scarce, so I picked up the rock and hurled it along the path. So began our game of “fetch,” which lasted the entire half-mile walk to the dolmen: The dog got the rock (always the same one), carried it in her mouth back to the spot in the trail where I had advanced, and dropped it slobber-covered at my feet. I picked it up, threw it ahead and walked some more.

Rocks with a View

When we came up a hill, I gasped when I caught sight of giant rocks like three legs supporting a massive horizontal rock that nonetheless was elegantly stacked so that it looked like a bird taking flight. As we drew nearer, my dog friend guided me safely off the path and across the soggy bog until I arrived at the foot of the dolmen.

I could see for miles over the countryside; there wasn’t a soul around except my canine companion. I explored the stone monument, touching the cool rocks, crouching inside the hollow beneath its “legs,” which once (millennia ago) led into a subterranean chamber. 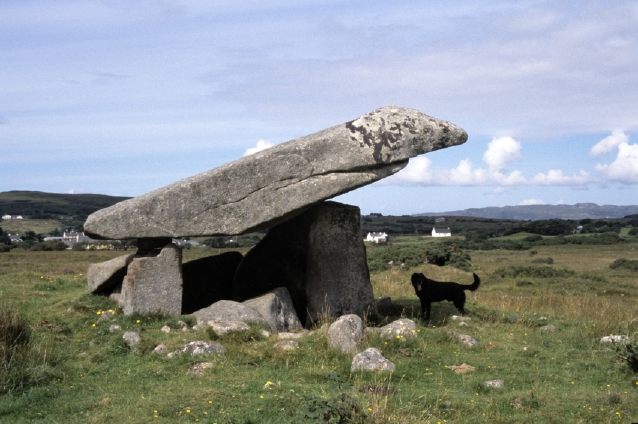 I wanted to write in my journal, so I sat on a nearby rock where I had a lovely view of the dolmen against the dramatic sky with storm clouds brewing on the horizon. Minutes later, my reverie was destroyed by an army of buzzing midges. I had to keep moving to escape their bites, so I ambled, assessing the dolmen from many angles and picking a few wildflowers.

Finally, I tied my bundle with a stem, placed the flowers at the dolmen’s feet, made a wish and kissed the bird-like capstone. It’s part of the dolmen lore that a kiss on the ancient rocks will make your wishes come true.

P.S. For more tips on places to visit in Ireland, visit Discover Ireland.