Stein is one of hundreds of Swiss villages that hold traditional dairy farming celebrations. ©Laurel Kallenbach

Throaty cowbells clang as flower-wreathed heifers parade through the streets of Stein, a tiny Swiss village in the Appenzell cheese-making region.

Dressed in traditional costumes, farm children and yodeling cowherds drive the cows toward the Viehschau (cattle show) judging area for the “Miss Stein” bovine beauty contest. There, the cows’ stature and coloring will be evaluated. It’s not just about pretty faces—honorable mention goes to cows with the best-looking udders and highest milk production.

On this late-September Tuesday morning, I’ve joined crowds of people jostling to watch the cows. Hundreds of people are clustered along the parade route. Stands sell toys and food; someone hawks balloons.

The streets in Stein, in the Appenzell canton of Switzerland, are festive on Cattle Show Day. ©Laurel Kallenbach

“Schools are closed today, and the whole town is here,” Antonia Brown Ulli, a tour guide, tells me. She lives in Stein and is wearing a dirndl dress for the occasion. “This is one of the village’s biggest annual festivals.”

Indeed, the locals are impressively dressed, especially the men who are decked out in Appenzell finery consisting of red embroidered vest-jackets, fancy braces decorated with silver plates, black hats ringed with ribbons and flowers, and spoon-shaped earrings. Many also wear carry a wooden milking pail over one shoulder.

In the days of up-to-the-millisecond Swiss watches, I’m comforted that age-old cow herding traditions are still heartily celebrated by the entire community. And these cattle processions happen in rural villages all over Switzerland. (Germany and Austria too.)

In fact, the lead cows for each farm are adorned with bright flowers, ribbons, and fir branches on their heads. I’m giddy. As a cheese lover, I think it’s a grand idea to celebrate the cows (and goats too!) who provide milk for my favorite food.

The day before, I had visited the Appenzell Show Dairy, where visitors can see how the world-famous Appenzell cheese is made—and can taste it too! There’s a full restaurant on site.

The pageantry and music—bell-clanging and the yodel-like singing of the cowherds—is my farewell to Switzerland. An hour later, I’m zipping on the train to the Zurich airport. There, on the shuttle train to the international terminal, the piped-in sounds of mooing cows and cowbells makes me tear up. Even though I haven’t officially left the country, I’m already nostalgic for this scenic country. 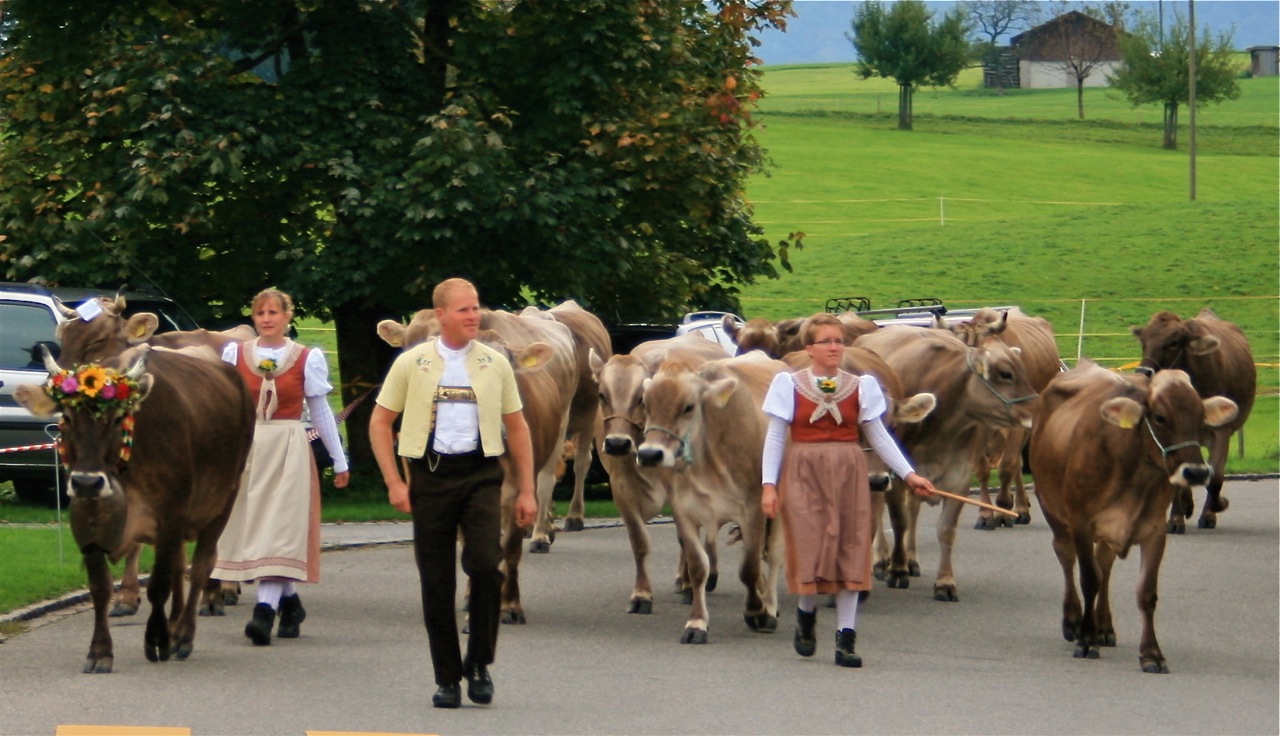 In late September, Swiss dairy farmers parade their cows through the streets of the Appenzell village of Stein. ©Laurel Kallenbach