Hovenweep National Monument has a lovely visitor’s center, and the monument and archaeological site straddles the Colorado/Utah border. (The park is located northwest of Cortez, Colorado.)

Ken and I spent about three hours in this small park, although next time I’d love to camp for one or two nights so that we’d have more time to explore this beautiful area, best known for its ruins.

The enchanting two-mile trail through Hovenweep’s Little Ruin Canyon is to be savored. Filled with square, round and even a spiral towers—along with an assortment of other buildings, storerooms and a “castle” complex — this narrow canyon must have been a 13th-century southwestern Manhattan.

Like most of the Ancestral Puebloans’ impressive architecture, Hovenweep’s dwellings were abandoned just one or two generations after they were built. Drought and deforestation probably factored into the people’s departure, and they moved south where resources were more plentiful. 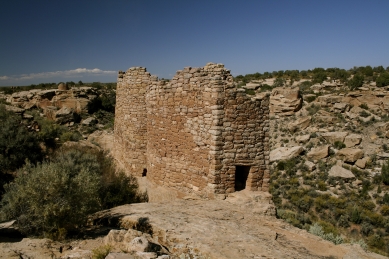 The hike through Little Ruin canyon is self-guided, but there’s a descriptive brochure that identifies all the prehistoric buildings. (Temperatures during October’s Indian Summer were about 80 at noon.) At the end of the hike, we stopped and rested on a bench, soaking up the warmth like the collared lizards of the area. Overlooking the canyon under brilliant blue skies—with the late afternoon sun golden on the stone and twisted pines—was magical. 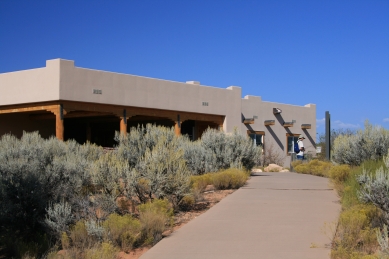