December 2020: Because of the coronavirus pandemic, many cities and towns in Germany had to cancel their annual Christmas Markets, a tradition since the 1300s. Some places are allowing markets with only a few, widely spread booths. Here’s a look back at warm memories of the Christmas Market in Wiesbaden, which was cancelled this year.

I grew up with a lot of German Christmas traditions, and for years I’ve thought going to a Christmas market in Germany, would be fun way to kick off the season. My hunch was right: Germany knows how to celebrate Christmas in an Old World way.

Wiesbaden, just a half-hour train ride from Frankfurt, hosts the lovely Sternschnuppen Market (sternschnuppe translates as “shooting star”). I was enthralled at its beauty, which combines traditional seasonal décor with contemporary lily-shaped light sculptures above the marketplace. (The lily, or fleur-de-lis, is on the town’s motif.) The whole affair—wooden huts where vendors sell foods and handcrafts—is held in the old town’s historic square, in the shadow of the church, or Marktkirche.

Tree ornaments are just some of the goods for sale at the Christmas Market. ©Laurel Kallenbach

At the annual market, locals and tourists alike gather to hear live music—one night I caught a quartet of alphorns (you just don’t hear that every day in the States!)—to shop, to mingle, and to toast the season with glühwein (hot, mulled wine sold in specially designed mugs that you either keep as a souvenir or return for your deposit).

I quickly discovered that German Christmas Markets and glühwein go hand in hand. When the temperatures drop, nothing warms you more than a mug of steaming red or white glühwein held between your mittens while you sip and chat with friends while admiring the Christmas lights.

And who can resist the aromas of cooking? There are plenty of traditional market foods as well, including bratwurst and other sausages of various kinds and sizes, and potato pancakes (kartoffelpuffer) served with applesauce.

The Germans are passionate about sausages. Giant grills cooked all types of bratwurst, including the long, half-meter brats (cut in half to fit them on a bun. ©Laurel Kallenbach

I tasted these yummy, crisp-fried treats with Wiesbaden’s mayor, who happened to be at the Puffer Christ’l stand at the same time as I was. Owner Christl Glöckner joined us and brought some white glühwein for us to share.

Through my handy translator and guide Yvonne Skala, of Wiesbaden Marketing, the newly elected mayor told me one of the things that makes the city’s Christmas Market so special is that the organizers select vendors who sell handmade or German-made crafts.” No “Made in China” stickers here.

Indeed, as I browsed the huts, I found traditional ornaments, carvings, candles, nutcrackers, knitted gloves and hats, handmade lace, wooden toys, local cheeses and game, and more. For amusement, there’s a colorful, Baroque-style carousel for kids of all ages to ride.

Presiding over all the festivities is the high-spired, Marktkirche church, built in the mid-1800s.

As a special treat, Yvonne took me to the daily weekday 5:45 organ music inside this Protestant church. We sat in one of the pews and gazed at the star-painted ceilings and neo-Gothic arches while the organist pulled out all the stops on the pipe organ. Compared to the revelries outside, it’s a welcome, contemplative timeout for some reflection on the quieter side of Christmas. Visitors are welcome to stay for the following Advent church service, but we continued out into the marketplace.

I stayed in posh digs in Wiesbaden: the Hotel Nassauer Hof, a historic hotel that has hosted the likes of Kaiser Wilhelm II, Tsar Nicholas II, John F. Kennedy, Richard Nixon, the Dalai Lama, and Vladimir Putin. Among the hotel’s many attributes was a location just a five-minute walk from the Christmas Market.

Another plus was that the Nassauer Hof has its own thermal spring, which feeds into the hotel pool. The result is naturally warmed mineral water, slightly salty, which buoys you up. Floating in heated water was the perfect antidote to several hours at the chilly outdoor market.

Another way to warm up during the Wiesbaden winter is in the saunas, steam rooms, and mineral baths at the Kaiser-Friedrich-Therme. This spa is built on the ruins of the ancient Roman baths, and the current baths were built in 1913, and restored for the centenary. I’ll blog more about this later, but it’s a truly unique place to visit and “take the waters.”

The stage at the center of the market often has live performances, such as the four alphorn players I listened to. ©Laurel Kallenbach 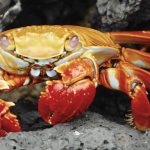 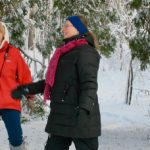