We hiked along the Gustav Holst Way on today’s Cotswold trek. ©Laurel Kallenbach

August 2021: It’s a great time to reminisce about past travels while most of us stay at home during the COVID pandemic.

Day 3 of our English countryside walking adventure (arranged by Cotswold Walks)  happened to be my birthday, and the 6.5-mile route from Bourton-on-the-Water to Guiting Power held many delights.

Much of our path during the day followed the gentle River Windrush, which sometimes seemed to be more of a brook than a river.

At the beginning of our morning ramble, a swan flapped over the field we were walking through as it descended for a water landing. The air on the magnificent white bird’s great wings made a hollow, whooshing sound. I don’t recall ever seeing swans flying before, so this long-necked bird seemed like a good-luck omen for the day.

That was fortunate, because about an hour later Ken and I encountered gigantic cows with sharp horns. They grazed peacefully on the opposite side of a wire fence and the Windrush, which had dwindled to ditch size, but their gazes seemed hostile. We stopped to take a picture, but a mean-looking bull took offense and started advancing toward us as if he meant business, so we moved along quickly.

Today the terrain became more hilly and scenic, and flat fields gave way to woodland. And imagine our delight when we discovered that we were walking on part of the 35-mile trail way called the Gustav Holst Way, named for the composer who’s best known for The Planets. Born in the Cotswolds, Holst spent much time—like us—ambling through the hills and countryside of this region, which he memorialized in his pastoral “Cotswolds” Symphony in F major. (I’m listening to it as I write.) I got so carried away singing the Dargasson jig tune from Holst’s St. Paul Suite that we missed one of our turns.

We didn’t go far off course—less than 50 yards, thanks to the detailed instructions provided by Cotswold Walks—so we quickly got back on track again, and soon I was humming the “Greensleeves” theme that weaves through the end of that piece. (Yes, the Cotswolds Way has great appeal for classical music geeks like us!)

A Rest in Tranquil Naunton

Hiking up and down hills offered us the chance to take in the impressive vistas of medieval villages from a higher vantage point. We met a couple, who were also doing the Best of the Cotswolds circuit, so we hiked with them for about half an hour on the trail that morning. Just before noon, our little group spotted Naunton and decided to have a quick look-around at this town of about 300 people.

A house beside the River Windrush ©Laurel Kallenbach

As we arrived on foot, we first saw a large dovecote, a structure with 1,176 dove-sized holes that dates back to the 1600s. (The Cotswold Walks guidebook said that back in the day, the meat of young doves was a dish for the wealthy, so that accounts for the popularity of names like “Dove Cottage” and “Dove Lane.”)

The sign for the Black Horse pub in Naunton ©Laurel Kallenbach

Naunton sits in the valley beside the River Windrush, and there’s a very pretty path right along the water with willows and lots of lovely riverside cottages to admire.

Ken and I sat along the banks for a rest and nibbled on snacks, then we wandered over to the Black Horse Inn, a traditional pub where our friends decided to have lunch. We didn’t eat there because we’d planned to have a late lunch at the next village.

Refreshed, we continued on toward Guiting Power (pronounced “GUY-ting”).  Ken and I crossed through a pasture where a horse followed us all the way to the gate. I think she was hoping we had a treat, but we’d already eaten our snacks. For a while we had a light drizzle—almost more of a heavy mist—that warranted our rain jackets for 10 minutes or so.

Right at 2:00, the Warden’s Way path took us through a cornfield where the tassels were as tall as Ken. When we emerged from the stalks, we caught our first glimpse of the crenelated tower of Guiting Power’s Anglican church, St. Michael and All Angels, which dates back to Norman times. Sheep were grazing in the surrounding pastureland, and though it was tempting to stop and admire, we vowed to return later because we were famished and in need of a beer.

We checked first at the Farmers Arms, a traditional-style pub that served things like fish-and-chips with mushy peas and steak-and-kidney-pie, but the kitchen was already closed. So we kept walking up the hill to the Old Post Office, which has a café, but it didn’t serve hot food after 2:00. So we vowed to return at teatime and continued up the road to the Hollow Bottom Inn, located on the edge of town with views over pastoral fields that were bordered by traditional, drystack-stone fences.

The postmistress took a break outside the Old Post Office in Guiting Power. ©Laurel Kallenbach

This more contemporary gastro-pub serves some chef-inspired creations. We started with a local microbrew ale and then ordered a perfectly spiced (with tarragon, we surmised) Coronation Chicken Wrap and salads filled with the bounty of local gardens in late August. (Many restaurants in the Cotswolds serve local and organically produced food.)

The menu also offered an interesting story about the origin of the phrase “wet your whistle.” Apparently during the Middle Ages English pubs served ale in ceramic mugs that had whistles baked into them. When you needed a refill, you blew the whistle so the barmaid would come and “wet your whistle.” True tale or just pub lore? Either way it’s a fun story.

St Michael’s and All Angels presides over the village of Guiting Power. ©Laurel Kallenbach

While we were eating, the couple we’d hiked with that morning checked into the inn. Whimsically, we wished we were doing the same, but because it was the day before Bank Holiday weekend, Guiting Power’s modest number rooms were booked months in advance, so we were being picked up by a taxi and returned for the night to Bourton-on-the-Water at 6:00.

(There were pros and cons to this arrangement. On one hand, it was more efficient because we didn’t have to pack up our suitcases before departing on our morning walk. And we didn’t waste time settling into a new hotel or B&B. However, we also didn’t have the experience of spending the night in this distinctly cute town.)

The Glorious Village of Guiting Power

After lunch, Ken and I explored Guiting Power, a sleepy, two-street village with just a few shops, the two pubs, a town green, the café/tea shop/post office, and a handful of pretty stone houses. The “tourist” description of Guiting Power is that there’s not much to do there other than have a pint and a bite, but the fact is that we love little towns like this that slumber under the sun on a late-August day.

In fact, I will say it: When I’m in love with a village, I just know I belong there, and Guiting Power stole my heart that afternoon.

Maybe it was the way hollyhocks and roses and purple flowers framed the doorways and windows of those stone cottages, attracting buzzing bumblebees and flittering butterflies.

Toasting my birthday at the Old Post Office ©Ken Aikin

Maybe it was the sheep grazing in the pastures around the church as we sat in the cemetery and gazed upon the countryside.

Maybe it was the joy of having chocolate cake and a birthday cappuccino at the outdoor table at the Old Post office while watching the locals  walk their dogs. We bought some stamps and basked in the sun and wrote  postcards.

Really, that’s about all Guiting Power had to offer—and it was heaven. No traffic. Very few tourists. Just the simple joy of spending a quiet afternoon in the prettiest of Cotswold villages. And lots of beautiful flowers.

Brilliant flowers in the village of Guiting Power ©Laurel Kallenbach

Guiting Power was exactly what Ken and I had dreamed of when we were planning our walking trip through the Cotswolds: and here we were at this perfectly perfect village on my birthday! I can’t imagine a better present.

More about my travels in England:

I couldn’t help but hum Johann Sebastian Bach’s “Sheep May Safely Graze” when I beheld this pastoral view on the edge of Guiting Power. ©Laurel Kallenbach 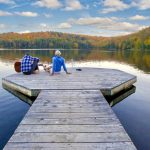