The Channel Islands captured my imagination when I read Scott O’Dell’s Newbery Award-winning book, Island of the Blue Dolphins, about a Chumash girl who lived there alone after her tribe was forcibly relocated to the mainland in the mid-1800s.

Now for the first time, I’ve gotten to visit one of the Channel Islands, celebrating its 34th anniversary as a National Park this year.

The Channel Islands can be reached from the marina at Ventura (or from the city of Oxnard) by boarding an Island Packers catamaran.

I went to the island of Santa Cruz, which was a 9:00 to 5:00 day trip that runs year-round. (I was there in mid-October.) It takes an hour to reach the two landings: Scorpion Anchorage and Prisoners Harbor (you can depart at either).

Things to Do on Santa Cruz

Kayaking Around the Shores of Santa Cruz Island 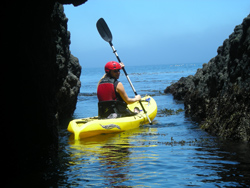 The tour guides with Channel Islands Outfitters show you how to paddle in the Pacific.

I chose to spend the day at Santa Cruz on the water by taking a guided sea kayak excursion with Channel Islands Outfitters. They provided individual top-seater kayaks, a wetsuit (sleeveless for ease of paddling), life vest, dry bags for clothes, and experienced guides who spend a lot of time in the park.

(The National Park Service does not allow any tour operators to serve food, so you have to bring along your own food and water. Drinks and snacks are available for purchase on the Island Packers boat.)

My group’s guides, Clay and Matt, asked the boat to drop us off at a lovely area a little west of Prisoners Harbor off Nature Conservancy land. They instructed us on safety, gave us paddling tips, and helped us suit up. Then off we went, paddling among the jagged shoreline and kelp forests around Santa Cruz.

The ocean was calm, and it wasn’t hard to approach the rock cliffs for up-close views of rocks crusted with starfish, barnacles, and limpets. Cliff pointed out the bright-orange garibaldi, California’s state fish. I never got a close look, but its color shone brilliantly from the water.

In some places, the kelp forests were so thick that I felt like I was paddling through sand. My paddle blades kept getting caught in the wavy strands of brown kelp or tangled amid the kelp’s air bladders. When that happened, we were told to slide the paddle gently upwards rather than trying to rip it away from the sea plants.

Shy harbor seals poked their heads above water to check out our kayak group, but if we got very close or make direct eye contact, they slid their round heads beneath the surface and disappeared in an instant.

The curious California sea lions were more bold. At one point when I was paddling a short distance from the others, I heard a sea lion blowing air as it surfaced right behind me. I was a little scared, but it didn’t come too close—and then it dove. A moment later, I heard the sea lion blow again, this time on the opposite side of my kayak. I said “hello there!” before it dove again. Our little game of tag when on for a few minutes, then the sea lion moved on to more interesting things—such as catching delicious fish!

Our group stopped at a rocky beach for lunch. It was a cloudy day with several rain showers while we were paddling, so when we got on land I was pretty chilly. (And a little seasick from paddling through some choppier waves. Who knew?) Fortunately, on land Clay and Matt unpacked our dry clothes, so our picnic was fairly comfortable and enjoyable. 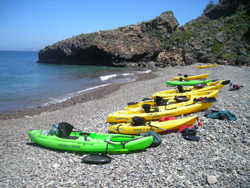 On the beach at Santa Cruz island

Far too soon, it was time to leave this quiet adventure of paddling placidly amid the ocean wilds. It felt great to be propelling myself through the water, smelling the salt air, and watching the waves and the sky and the pelicans.

As someone who lives in a land-locked state, I just never tire of the miracle of the sea.

What are the best kayaking spots you’ve visited? Leave a comment below.