My hometown of Boulder, Colorado, attracts visitors from all over the world. The city is well known for its vistas of the scenic Flatirons; for its hip, new-agey vibe; and for its fit population of cyclers, hikers, and rock climbers. Over the decades, magazines have dubbed Boulder the fittest town in America, the happiest town in the country, an outdoor mecca, brewpub central, and a health-food heaven.

Boulder’s aura of positivity took a hit on March 22, 2021, when it joined dozens of American cities that have experienced a gun-related mass murder. Among the dead are 10 people: shoppers, supermarket employees, and the first police officer to arrive at the scene.

In the shooting’s aftermath, Boulder’s most-visited site is now the memorial at the Table Mesa King Soopers supermarket where the fatal shooting occurred. A collection of heartfelt condolences—flowers, candles, cards, posters, Tibetan prayer flags, stuffed animals, balloons, photos—adorns the chain-link fence that surrounds the crime scene, brought by people in our community and by others who have journeyed here to pay their respects.

These memorial gifts are a small comfort to the families and friends of the those who died. The loss of each person has sent ripples of grief through the community—even through those of us who didn’t personally know the shooting victims. To lose 10 at once is a blow—all that energy and potential gone.

We Boulderites excel at joyous displays of athleticism. One of the largest is the Bolder Boulder 10K race held each Memorial Day (except during the pandemic). More than 50,000 participants run, jog or walk while another 70,000-plus spectators cheer them on.

We clap for elite runners from around the globe, and we shout encouragement to eager but sometimes exhausted runners of all ages and abilities, including those who race despite injuries, disabilities, or medical diagnoses. The fastest of all are the wheelchair racers, many of whom are paraplegics or amputees, who know a thing or two about overcoming heartbreak and difficult times. As an annual Bolder Boulder spectator, I love to holler myself hoarse: “You can do it! Keep it up, keep it up!”

Right now, the thousands of people who gather along Table Mesa Drive in Boulder every day aren’t there to cheer. We’re there to weep, to pay tribute, to honor the bravery of shoppers and grocery-store employees and a police officer. They were all going about daily life and doing their necessary work when they were cut down. Tackling everyday chores, carrying out work duties, and picking up food for dinner are rarely celebrated publically—not even in positive-thinking Boulder. Though maybe they should be.

People gather mostly in silence at the King Soopers memorial to confront the senseless loss of life, the randomness of death. There’s anger and sorrow. At night, the Boulder Star is lit on a mountainside that overlooks our town. It usually shines only during the winter holidays, but right now we need the hope that beacon represents.

In addition to messages of condolence and support for the families of this lost were posters about gun control. ©Laurel Kallenbach

The City of Boulder has invited people all over Colorado to go outside at 8:00 every evening for 10 days and to take 10 slow breaths, followed by 10 minutes of silence. Each minute of breathing honors a shooting victim.

For the first eight months of the coronavirus pandemic, I howled  nightly at 8:00 from my porch in gratitude for health-care workers and first responders. That ritual lifted my spirits, especially when I heard neighbors clapping, cheering, and barking at the moon.

On Sunday, March 29, my husband and I visited the King Soopers Memorial. It was sunny and 55 degrees, but icy gusts ripped down from the mountains. Spring in Colorado is a season of abrupt changes: one day you’re out jogging in shorts, the next day you’re shoveling snow. One day people dash into a local grocery store for milk or bread or to get a COVID vaccine, the next day that supermarket is a crime scene.

In shock, the perpetually hiking, cycling, yoga-practicing people of Boulder moved slowly around the King Soopers memorial, reading heartfelt notes addressed to the dead or memories written by a loved one.

Some signs plead for gun reform. “How many more?” asks one designed to look like the state flag that shows a toppled-over heart shape with a bullet hole in it. “Let’s hope our push for change lasts longer than these wilting flowers” says another sign surrounded by bouquets of daisies and roses.

When I was at the memorial, a group was singing “Amazing Grace,” Leonard Cohen’s “Hallelujah,” and the Beatles song “Let It Be.”

There were posted notices offering contacts for free crisis counseling. Sky, a registered therapy dog, did his part by letting dazed and teary-eyed visitors pet his warm, alive little body.

The winds caused Mylar balloons tethered to the chain-link fence to tug to the east, then the west. Frigid gusts twisted the American flag on its pole so that it flew backwards. I thought about the grief, unyielding as a mountain, that the families of the slain were experiencing.

I’ve almost given up hoping that gun laws will change, that automatic weapons will be banned, that stricter background checks will be required to buy guns. Boulder outlawed the sale and possession of assault weapons, but two weeks before the mass shooting, a court decided that our city couldn’t enforce the ban because only the state can regulate firearms in Colorado.

I used to believe the only way gun laws would change was if someone started shooting in congressional chambers. The insurrection at the US Capitol on January 6, 2021, proved me wrong.

So gun violence continues, as do the mass tragedies. What happened in Boulder has occurred in Columbine and Atlanta and Sandy Hook and Charleston and Pittsburgh and Virginia Beach and El Paso and Phoenix and Hamilton and Chattanooga and Roseburg and Aurora and Fort Hood and Thousand Oaks and Seattle and Sutherland Springs and Binghamton and Orlando and Norcross and Minneapolis and Virginia Tech and San Bernadino and Las Vegas and Parkland. A week after the Boulder shooting, Orange, California, was added to the list.

Will these shootings persist until every city and town in the nation has a memorial to the victims of people with guns?

I did take heart in hearing that a local Mennonite church, located just across Broadway from the King Soopers, held a Guns to Garden Tools event on Good Friday. It’s a project of the nonprofit RAWtools, which de-weaponizes donated guns and forges them into tools for planting. In the church parking lot, people got to pound a hammer on a section of a gun barrel over an anvil.

For now, the time for cheering in Boulder is over. The time of mourning has begun.

While I’m observing my 10 minutes of daily silence for the slain, I touch into my center of calm, and my outlook brightens slightly. Perhaps good things will again be possible. After the meditation, I can believe for a few moments that maybe—just maybe—the “Let It Be” lyrics from the Beatles’s song I heard at the King Soopers memorial on a windy Sunday morning could come true:

And when the broken-hearted people

Living in the world agree,

There will be an answer, let it be.

SOBO is an acronym for South Boulder, the neighborhood where the shooting occurred. ©Laurel Kallenbach 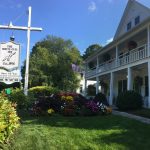 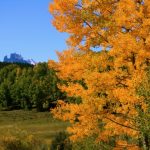