December 2021 update: Because of the COVID Omicron variant, this Christmas market, and most others in Germany, have been canceled.

In an old-town square in Esslingen, Germany, a jester on stilts roams the cobblestones, stopping to juggle and pose for photos with wide-eyed children. Musicians on a stage play ancient, nasally instruments and sing bawdy songs. (Although I don’t speak German, naughty humor seems to be universal.) A woman in a long skirt and laced-up bodice carries a basket of elegant, hand-dipped candles for sale.

Colorful scenes like these unfold before me as I eat homemade suppe und brot—soup and bread—served in handmade crockery bowls in the medieval part of the Esslingen Christmas and Medieval Market.

Held annually from late November until December 21st, the Medieval Christmas Fair (Mittelalter-märkt) and the traditional Christmas Market have lured me to historic Esslingen am Neckar, a 1,200-year-old town near Stuttgart in southern Germany. Just a 2.5-hour train ride from modern Frankfurt, old-town Esslingen feels centuries away, with its medieval churches and colorfully painted, half-timbered houses with crisscrossed beams.

Esslingen has hosted a Christmas fair since the Middle Ages. Called Weihnachtsmärkte and Christkindlmärkte in German, Christmas markets originated as town fairs as long as a millennia ago so that villagers could stock up on supplies for the oncoming winter.

Esslingen is the ideal location for this annual celebration, and I’m among hundreds of delighted visitors exploring the exotic booths and huts in the costumed medieval portion of the market—while also appreciating the Christmasy atmosphere in the “contemporary” part of the market, which itself is actually quite Old World and old-fashioned.

The Medieval Market—a cross between a Renaissance festival and Christmas fair—has the appeal of craftspeople dressed in period costumes demonstrating revived old art forms and trades. During my two days in Esslingen, I watch calligraphers, candle makers, blacksmiths, knife grinders, soap makers, bakers, tanners, brush- and basket-makers, and mead brewers plying their trades as they might have 700 years ago.

I linger at a number of tents and rustic huts and buy gifts: herb-scented soaps, a fudge-like Afghani sweet called shirpera flavored with cardamom, rosewater, and pistachio. (Such Middle Eastern treats came to medieval Europe via the Silk Road.)

A baker checks on fresh bread baked in a wood-fired oven. ©Laurel Kallenbach

In a special kids’ courtyard, children play Old World games such as hatchet-throwing, egg-breaking, and archery, and they ride a wooden Ferris wheel.

Give Me That Old-Time Christmas

In the traditional part of Esslingen’s Weihnachtsmärkt, rows of wooden huts (called stuben) are so thickly decorated with evergreen and pinecones I think of fairytales—the ones where the forest magically engulfs the kingdom, which sleeps for centuries. If that’s what happened in Esslingen, the town joyfully awakened to celebrate Christmas.

A fir-covered “stube” selling candy in the Christmas Market in Esslingen. ©Laurel Kallenbach

Browsing through Esslingen’s traditional Christmas market, I pause to watch as an old man in a Bavarian hat carves a bird. With fine-edged knives spread on his worktable, Helmut Höschle removes bits of wood from the feathers with a surgeon’s skill. His handiwork is quintessential Old World carving, much like the Nativity set my parents have at home—a gift from relatives who brought home figures of shepherds and the three kings decades ago from their travels in West Germany.

Walking through a Christmas Market is a sensory carnival, with elaborate decorations to gaze at, special holiday foods to sample, gifts to shop for, and all manner of music and entertainment.

When you get a bit overwhelmed, it’s time for a mug of glühwein—hot, spiced wine (pronounced “gloo-vine”), which is surprisingly sweet with hints of cinnamon and citrus. It can pack a punch, too, depending how long it’s been since you ate a bratwurst or currywurst.

In Esslingen, there are several glühwein vendors. My favorite is the giant Glühwein Pyramid: an outdoor tavern topped by a giant multi-tiered “carousel” with carved motifs such as angels, snowmen, toy soldiers, or manger scenes and a propeller on top.

The bar also serves beer, alcohol-free drinks, and Kinderpunsch (berry juice for kids). At German Christmas markets, you pay a deposit for the commemorative mug. I keep mine as a souvenir, but you can return the mug in exchange for your deposit.

Time Out from the Market

Thoroughly chilled and footsore from hours of exploring the old town and the markets, I take respite at a 150-year-old Schwaben restaurant (the region where Esslingen is located) called Der Palmscher Bau.

Closeup of the Pyramid atop the gluhwein bar. ©Laurel Kallenbach

Located in an 18th-century building, its comfort-food recipes, served in rustic-tavern ambiance, are a hit with me. The hot, creamy forest-mushroom soup thaws me out, and I love the Schwabian rostbraten (roast beef) with grilled onions and a dark sauce served with noodles and sauerkraut. (A dry Esslingen Riesling accompanies my dinner, naturally.) For dessert, I choose apple küchle, a roll-up with thin layers of dough and subtly spiced apples. Every sweet morsel gets forked into my grateful mouth.

Even a market as dramatic as Esslingen’s requires a few timeouts from the Christmas revelry. My choice: soak in the natural thermal waters at Merkel’sches Baths and Pool, about 10 minutes away from the Old Town center. The saunas, steam rooms, mineral baths, and massages are divine. (Most Germans don’t wear bathing suits except in the large sports pool. Check the schedule for women-only hours if you’re the modest type.)

I can also recommend yet another diversion in Esslingen: a tour through the fascinating Kessler wine cellars to see how the oldest sparkling wine in Germany is fermented. A guide takes me down into the 13th-century vaults where bottles of the wine ferment. From the damp ceilings, cellar mold hangs like Spanish moss; it’s not cleaned away, the guide explains, because the growth absorbs stagnant air and releases oxygen, which freshens the air.

After the tour, the Kessler tasting room is a delicious revelation. I sip the 2009 Pinot Blanc, and its taste reminds me of apples and herbs—while outside it is the chilly, middle of December. Someday I really must return to Esslingen in the autumn for the grape harvest and the accompanying wine festival.

The chestnut seller peels off the outer husk of the winter treat before roasting. ©Laurel Kallenbach

After sunset, I pull my wool cap farther down around my ears to keep warm. The smell of roasting chestnuts lures me to a booth where a man calls out to the crowd: “Heisse Marroni! Hot chestnuts!” He removes the lid off the three-foot-diameter pan and stirs the browned chestnuts, their skins popping open.

I buy a paper cone of the hot nuts and gingerly peel one. My fingers blacken from handling the charred skins, but they’re warm. I pop the smoky, starchy chestnut meat into my mouth. It’s bland and dry, but everywhere people are gobbling them, so I figure that perhaps it’s an acquired taste.

After dark, the Christmas Market blazes with colored lights. In the pulse-quickening medieval streets, however, only a few are electric; the rest are flaming torches and braziers, which lend an ancient mystery and romance to the place. Musicians pound on drums while a fire-dancer snaps sparks into the air with his bullwhip. It’s all thrilling and quite dramatic.

Then the church bells peal to announce 5:00 Mass. A crowd forms around the Old Town Hall with its wedding-cake curlicues on the façade and its astronomical clock (built in 1589), which still keeps exact time and displays positions of the sun, moon, and zodiac constellations.

The astronomical clock on the front of Esslingen’s Old Town Hall marks the hour with the animated flapping of the eagle’s wings. ©Laurel Kallenbach

I’m not entirely sure why everyone is gathering, but it doesn’t take long to find out. What everyone is craning to see is the mechanical Imperial Eagle above the clock, which a flaps his wings as the bells ring.

Today’s crowd wears Gore-Tex parkas instead of cloaks and leather leggings and people snap pictures on cell phones. Even so, we’re collectively enthralled by the magic of an antique clock.

It just goes to show that Christmas beauty and merriment have lasted for centuries … and will continue on, I hope.

Esslingen Medieval and Christmas Markets: 11 a.m. to 8:30 p.m. daily from late November until a few days before Christmas. Search for information on all of Germany’s picturesque Christmas markets, visit Germany: The Travel Destination. 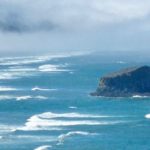