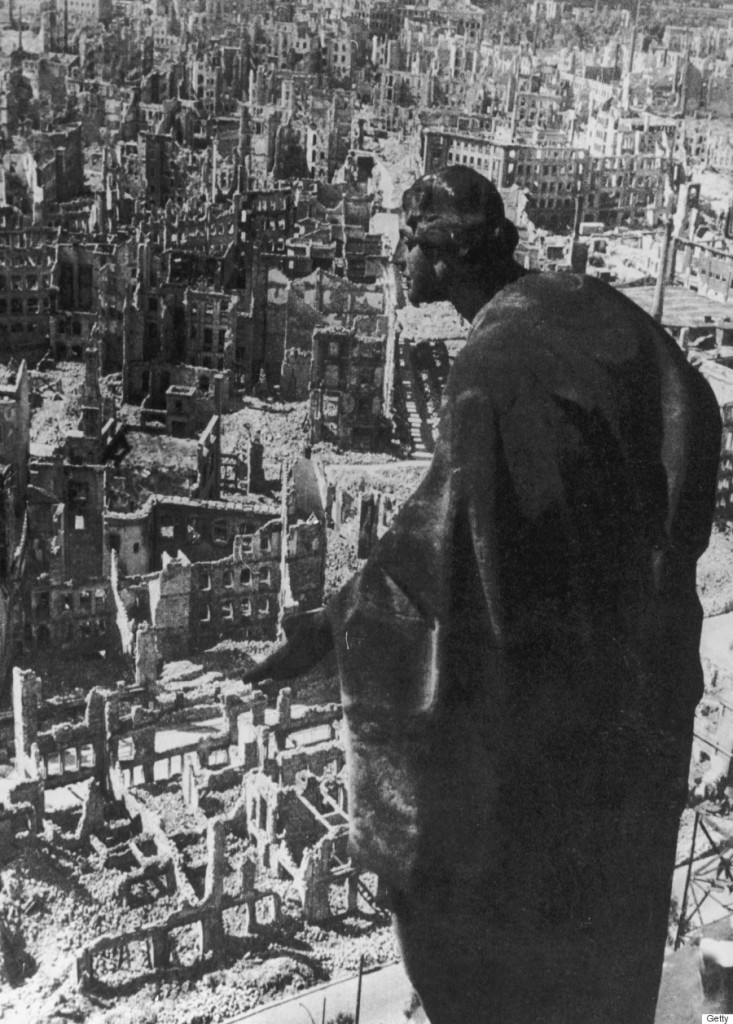 A famous photo of Dresden after it was bombed by Allied forces in February of 1945.

Today Dresden, Germany, is a glorious, vibrant, colorful city, but for decades it was remembered as an ash-covered, bombed-out shell. Grainy black-and-white photos of  rubble and piles of burned corpses in the streets were emblematic of  the annihilation caused by the WWII bombings in early 1945.

I’m writing this on February 13, 2017, Dresden’s Memorial Day, on which the city commemorates February 13, 1945, the day the British and American allies began bombing the historic city, which is sometimes called “The Florence of the Elbe River” because its church domes, spires, and ornate palaces and opera house are reminiscent of Florence, Italy.

The WWII bombing of Dresden turned much of the historic Old City to rubble. Few structures withstood the inferno generated by 650,000 incendiary bombs that the Allies dropped on the city during a  48-hour period. The human toll was about 25,000 dead, mostly civilians.

Some people say that Dresden was an “innocent” city with no Nazi ammunition factories or tactical advantage for the war. Others, including my guide for the “Slaughterhouse Five” tour, say otherwise. They point out that in 1934, the city of Dresden welcomed Hitler with open arms when he attended an opera at the beautiful Semper Opera House in the Theatreplatz. In honor of the fuhrer, Dresdeners renamed their theater square “Adolf-Hitler-Platz.”

In addition, there seem to have been some logistical centers located in Dresden during the war. Apparently, armaments were stored there, and military training was done in or near the city. These may have been for defense of the city—in times of war, it’s always difficult to know where to draw the line. And after almost six years of the war, the Allies were desperate to finish it, although Dresden’s destruction may not have played much of a part other than as a display of military dominance. 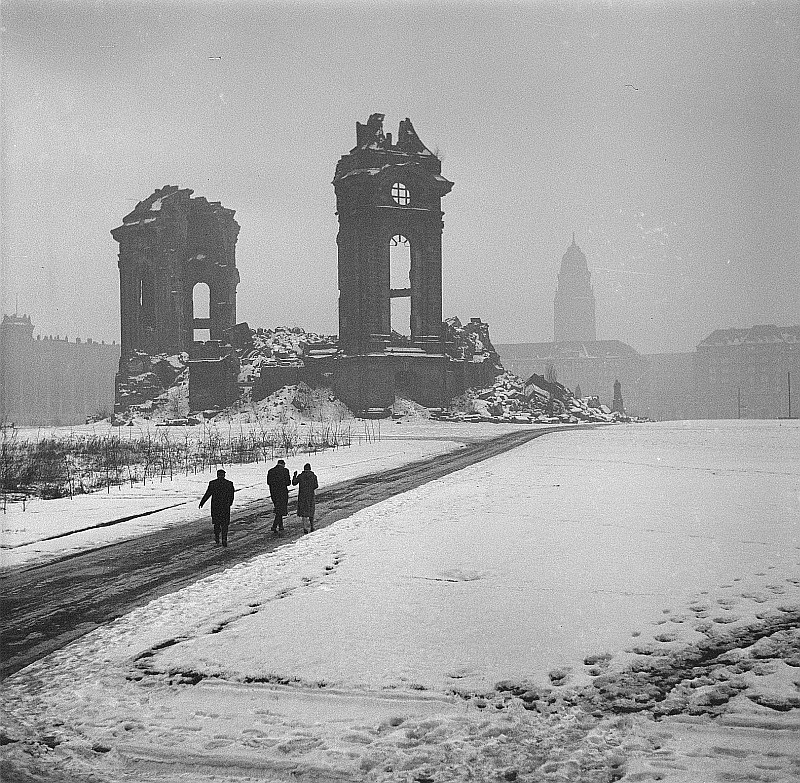 This  photo of the gutted ruins of the Church of Our Lady in Dresden was  taken in the 1960s, about 20 years after Dresden was bombed.

The primary symbol of Dresden’s destruction is the Lutheran Frauenkirche (Church of Our Lady), which had one of the largest domes in Europe. Several hundred Dresden residents took shelter from the bombs in the church’s underground vaults and crypts.

The church withstood the bombing for two days, but ultimately, the dome collapsed on the morning of February 15 from extreme heat; the temperature surrounding the church was estimated at 1,830°F. Reports say the church pillars became red-hot and exploded and that the outer walls shattered. More than 5,000 tons of stone plummeted to earth. The people in the basement evacuated just in time, only to succumb to the firestorm outside. 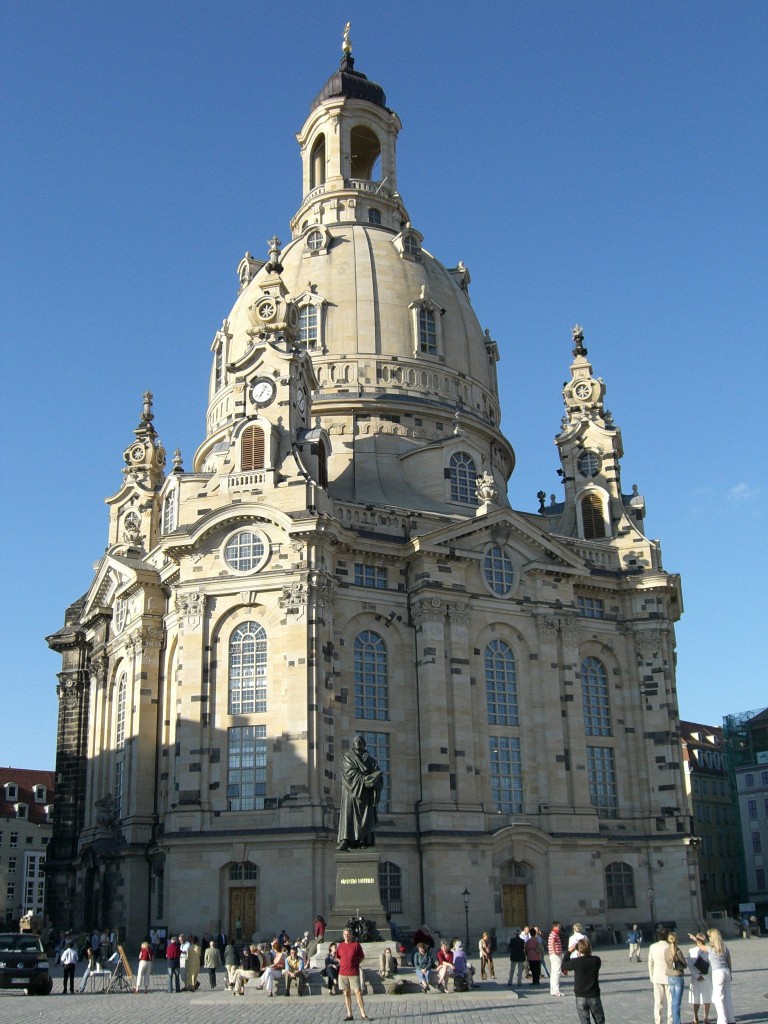 For decades, Dresden remained a city of rubble. The East German communist government cleared the streets of tons and tons of rubble, and decided to leave the two pieces of wall that stood as a memorial to war.

After German Reunification, plans began to rebuild the Frauenkirche. In 1993, archaeologists numbered every stone in the Frauenkirche ruins and photographed each stone’s location before clearing the area for reconstruction. “Rebuilding by replacing every stone that still existed into its original place became the world’s biggest jigsaw puzzle,” says Grit Jandura, PR manager for Frauenkirche Dresden. 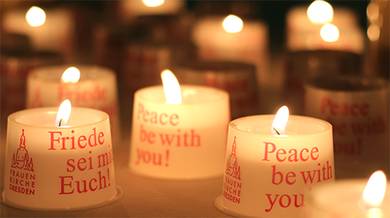 The church was completed and re-consecrated on October 30, 2005. It now stands as regally as ever, dominating the Neumarkt Square, with the statue of Martin Luther in front standing upright again. (During the bombing, he was “knocked out of his shoes” as the German expression says; only his feet on the pedestal were intact.)

The rebuilt church is now a monument to peace and reconciliation after the horror of war. Perhaps wounds have healed, but the painful scars from the bombing still exist, says Jandura. On my visit, I found a number of stories about the church’s resurrection to be especially touching. For instance, on the altar is a cross made from three iron nails taken from the ruins of England’s Coventry Cathedral, which the Germans blitzed in November of 1940. Both Dresden and Coventry suffered a similar tragedy during WWII, and with this gift, they are forever linked. 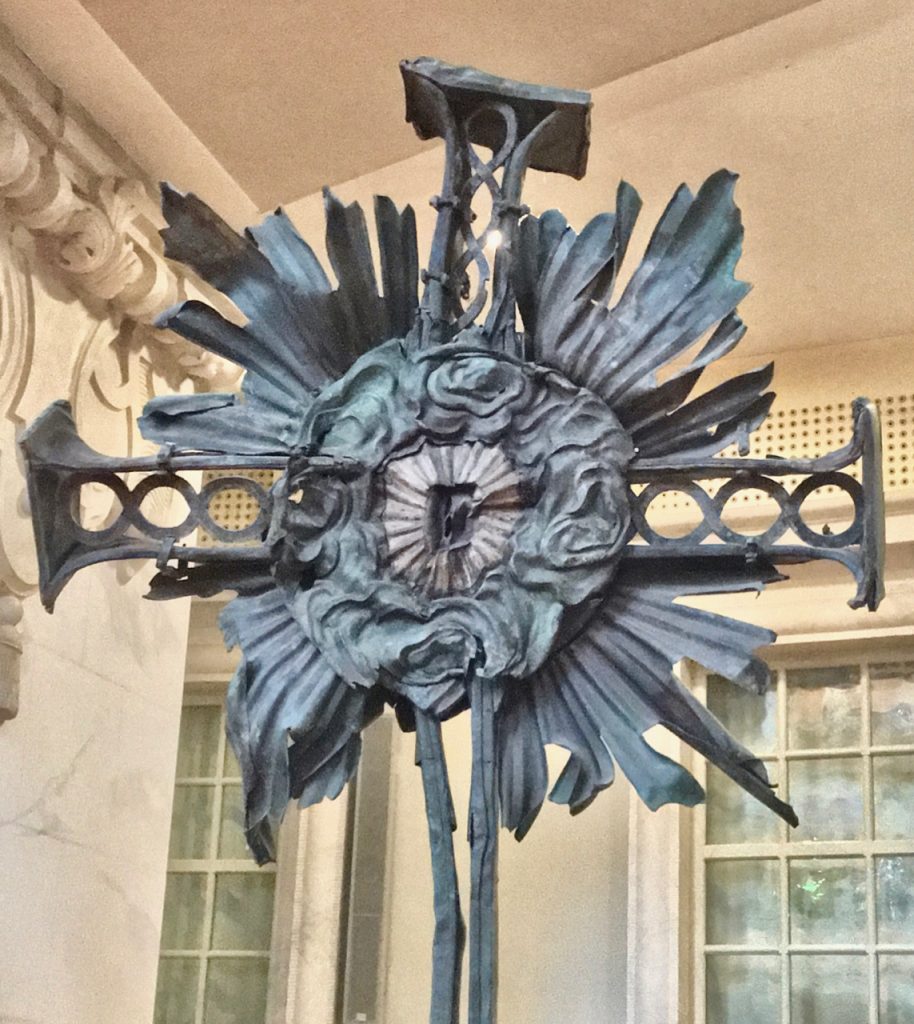 The  melted tower cross was discovered in the church’s rubble. It’s now a reminder of war. ©Laurel Kallenbach

Also, the tower cross that crowned the Frauenkirche’s dome was bent and melted after it fell during the conflagration. Warped and blackened, the cross is now displayed inside the sanctuary as a reminder of the destruction of WWII’s incendiary bombs.

However, there is a new, shiny tower cross atop the church. It was donated by the people of the United Kingdom, the country that dropped the first bombs on Dresden. While visiting, I learned a touching detail: the Englishman who crafted the metalwork for that cross turned out to be the son of one of the pilots whose plane dropped bombs on Dresden. The pilot’s son crafted the new replacement cross for the reconstructed church for free.

There are those who say that the restored Church of Our Lady is lovely, yet it’s no longer a harsh reminder of wartime atrocities. “Many wonder how children can learn about the cruelty of war now that the Frauenkirche is whole again,” says Jandura.

Outside the Frauenkirche during my February 2017 visit was a temporary art installation of upended buses by Syrian-German artist Manaf Halbouni that serves as a monument to contemporary wars. In Aleppo, Syria, people have been using buses as barricades against sniper bullets. 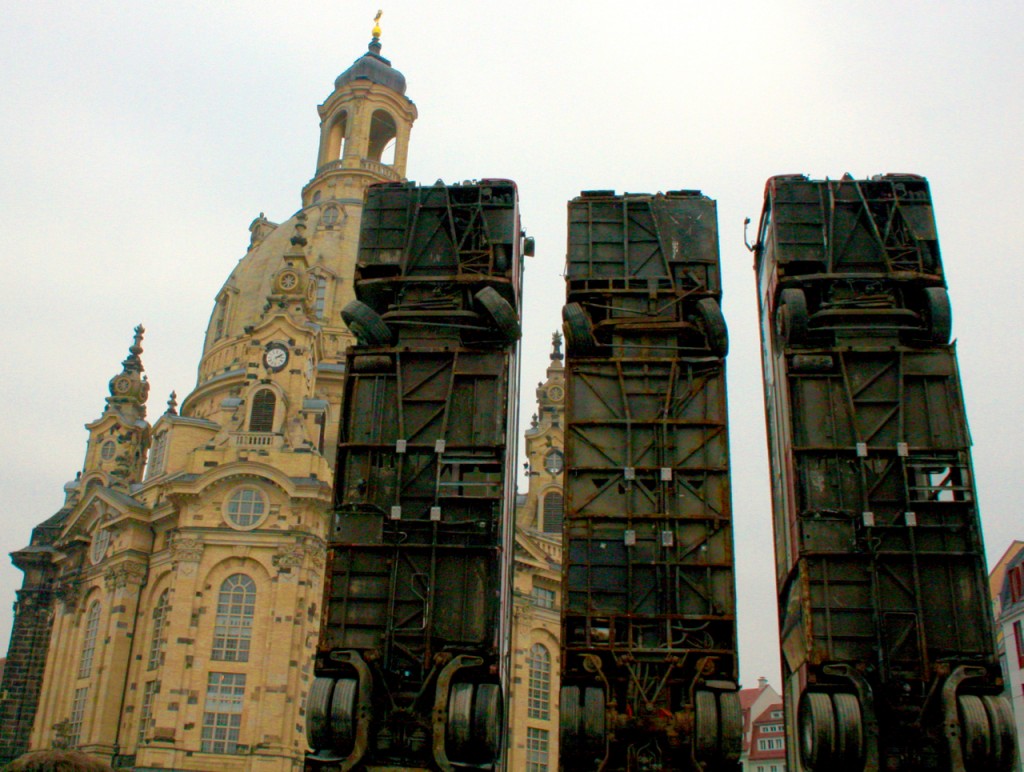 A 2017 art installation titled “Monument” recreates an image from the Syrian civil war: buses propped up in an Aleppo street as a barricade against sniper fire. (This view shows the underside of the buses.) The artist is Syrian-German artist Manaf Halbouni. In the background is the Frauenkirche. Photo © Laurel Kallenbach

The bus art installation—raw, mechanical, and titled “Monument”—was quite controversial in Dresden, yet it was a new testament to war’s horrors. In Dresden, where the Frauenkirche has returned to “normal,” it’s unsettling to remember that the world is still filled with violence and hatred, and that wars rage on.

Flowers and notes were attached to the grillwork on the underbelly of the buses in Neumarkt Square. The white note says, “Respect, Tolerance, Courage, Change, Responsibility, We are (all) Humans.” Photo ©Laurel Kallenbach 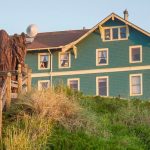 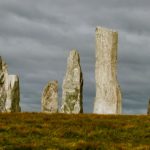